PTI challenge: Treasury men to skip PA session to be in Faisalabad

PTI challenge: Treasury men to skip PA session to be in Faisalabad 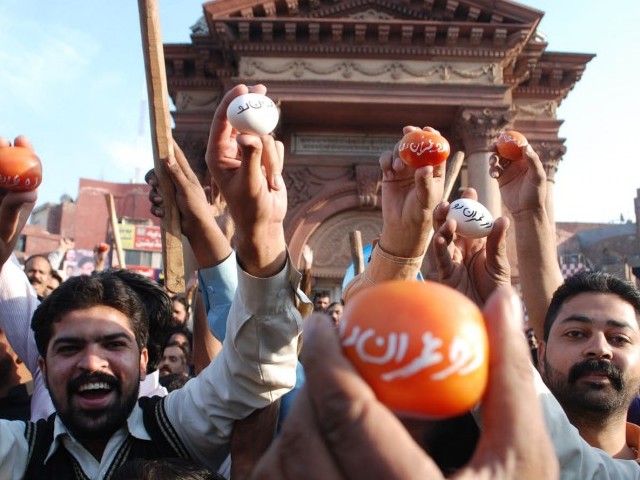 MNA Nisar Ahmad said the PTI chief might be able to force some shops to close down but traders in the eight main bazaars supported Prime Minister Nawaz Sharif. PHOTO: INP

None of the 21 Pakistan Muslim League-Nawaz (PML-N) members of provincial assembly from Faisalabad will attend the legislator’s session on Monday (today). Instead, they plan to be in their constituencies to deal with the Pakistan Tehreek-i-Insaf’s (PTI) threat of shutting down the city.

“All ruling party MNAs and MPAs from the city will try to ensure that no trader is forced to shut his business down,” the PML-N leaders The Express Tribune spoke to said on Monday.

They said PML-N workers would not confront the PTI supporters. However, they said they would stand by traders if they were forced to suspend their businesses.

All 11 MNAs representing Faisalabad are from the PML-N. Of the 22 MPAs from the city, only Khurrum Shehzad is from the PTI.

Arif Mahmood Gill, a PML-N MPA, said a meeting chaired by former law minister Rana Sanaullah on Saturday had decided that nobody would be stopped from joining the PTI’s protest.

“There are nine entrances and exits in Faisalabad. The PTI will try to shut down all. The traders are not willing to shut down their businesses. They have requested the administration to provide them protection,” Gill said.

MNA Talal Chaudhry said the people of Faisalabad had rejected PTI chairman Imran Khan’s call for the city’s closure. He said all PML-N lawmakers from Faisalabad would remain in the city throughout the day.

“The administration will take care of the law and order situation. The legislators will ensure that nobody takes law into their hands,” he said.

MNA Mian Abdul Manan said there were more than 100,000 shops in the city. “Nobody will be allowed to forcibly shut down the city. Imran Khan should have withdrawn his decision. Faisalabad is an industrial city. It cannot afford such a closure.”

Manan said the PTI chairman’s insistence on closing down the city would earn him people’s wrath.

“The people of Faisalabad will disappoint him. They will show him that they do not believe in agitation,” he said.

MNA Nisar Ahmad said the PTI chief might be able to force some shops to close down but traders in the eight main bazaars supported Prime Minister Nawaz Sharif.

“The traders love and support Nawaz Sharif. If anybody tries to force them to suspend their businesses, he will be dealt with according to law,” he said.

Sanaullah said the PML-Quaid had again changed masters and started supporting the PTI. “They have no future in politics. Faisalabad has rejected those promoting anarchy,” he said.

In a statement, he said no one was above the law. “No one will be allowed to take law into their hands. Traders will be provided protection by the government,” he said.