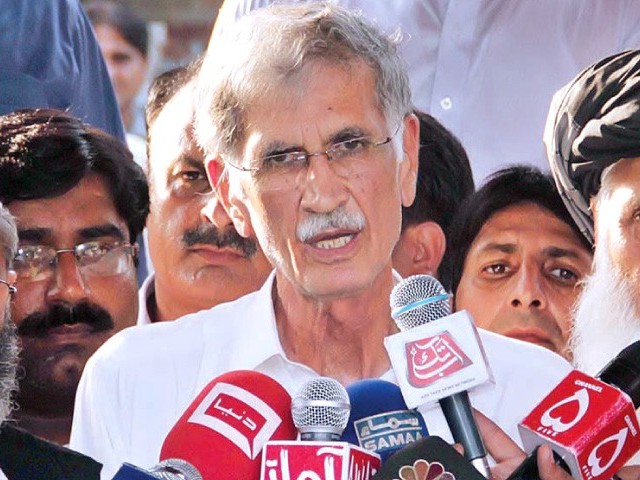 The chief minister said that both the varsities will not only impart technical education and training but also focus on research and innovation. PHOTO: APP

PESHAWAR: Khyber-Pakhtunkhwa (K-P) Chief Minister Pervez Khattak has approved the construction of two universities in the heart of Nowshera district.

The decision was taken during a meeting held at CM Secretariat, stated a handout issued on Saturday. Chaired by Khattak, the meeting was attended by Minister for Higher Education and Information Mushtaq Ghani, University of Peshawar Vice Chancellor Dr Prof Rasool Jan and other officials. While Air University will be established under the auspices of Pakistan Air Force, Technical University will be set up by the higher education department.

Khattak said Nowshera is the gateway to the entire province and state-of-the-art universities in the district will contribute to economic growth. He approved a strip of land along GT Road in Azakhel and instructed the relevant authorities to expedite construction work. Along with a 77-kanal botanical garden, the Air University and Technical University will be established on a 650-kanal area. Khattak said that Rs500 million have already been allocated for TU in the Annual Development Programme (ADP) 2013-14. He added that a number of other educational institutions were also being set up in the locality of Azakhel.

The chief minister said that both the varsities will not only impart technical education and training but also focus on research and innovation. “Our province has suffered great losses because of a lack of decision power in the past regimes. We will never put schemes of national importance on the backburner,” Khattak maintained.

He termed the promotion of technical education as the need of the hour. “It is the only solution for overcoming unemployment and spiralling out of the economic crises,” he said, adding the projects will not only provide employment opportunities to locals but continue to produce graduates that will contribute to the country.