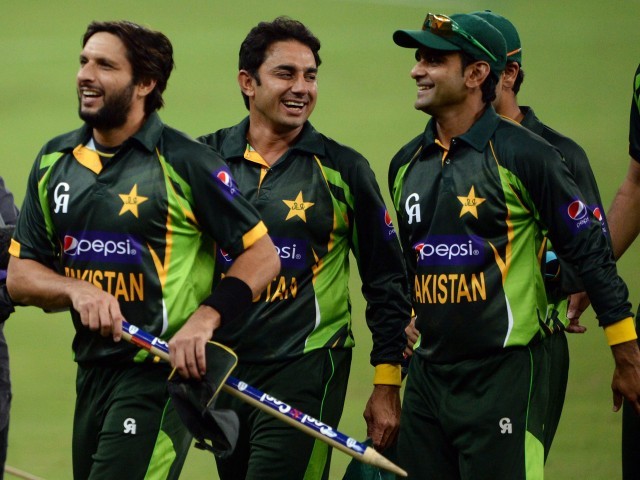 KARACHI: The National Selection Committee, led by Moin Khan, has included the names of Saeed Ajmal, Kamran Akmal and Shoaib Malik among others in the initial 30-man squad for 2015 World Cup, which is yet to be approved by Pakistan Cricket Board (PCB) Chairman Shaharyar Khan.

Ajmal is currently banned due to an illegal bowling action and is returning to Pakistan after unofficial tests on his action and remedial work under guidance of Saqlain Mushtaq.

The off-spinner has been asked by the PCB to appear in domestic matches before being sent for another International Cricket Council (ICC) official test.

“Ajmal has been included in the initial 30-man squad because we are hoping that he will get clear before the submission of 15-man lineup,” one of the selectors told The Express Tribune.

Meanwhile, Akmal has been included owing to his decent form in domestic cricket as selectors feel that he can be drafted in as a genuine batsman owing to his experience of opening the innings.

Malik has been kept in the mix as a backup of Mohammad Hafeez, in case he is stopped by umpires and ICC from bowling. Malik can provide a cover of an all-rounder who can bowl a good off-spin as well.

Though Malik has been out of the side, he has been making noticeable contribution in different T20 leagues around the world and had a decent Champions League T20 event.

“Both Ajmal and Malik are experienced campaigners, which is why we’ve given their names but let’s see whether all these names get the chairman’s approval. We’ve excluded Abdur Rehman from the list and have only named Zulfiqar Babar and Raza Hasan,” the official added.

Babar has become Pakistan’s main spinner since Ajmal has been banned.

NASA’s Orion capsule blasts off on ‘first step’ to Mars