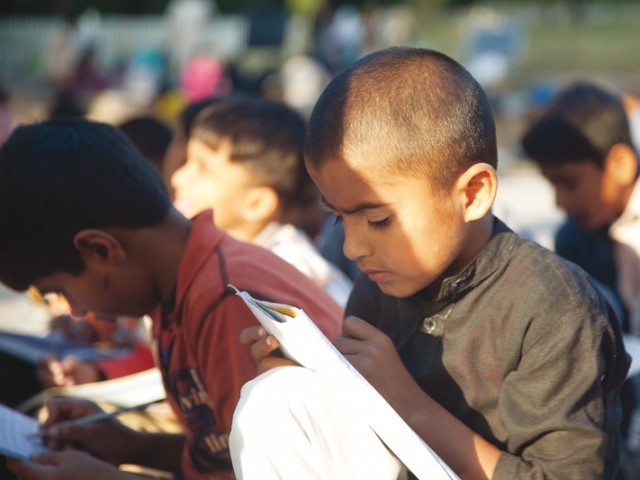 Seven-year-old Waqar Ali studies at a school for the underprivileged children in Islamabad set up by Ayub Khan in 1986. PHOTO: SA’ADIA KHAN

A little help by someone can sometimes change the entire course of one’s life. Ayub Khan, or Master Ayub as he is known to his students, learnt this lesson at a young age when he was assisted by a family friend while struggling to provide for his family. He reciprocated the gesture years later by setting up a free school for the underprivileged children of Islamabad, who like him needed a helping hand.

Khan left his birth city of Mandi Bahauddin in central Punjab for Islamabad at the age of 19. His father, who was in the army during the 1971 Indo-Pakistan war, was imprisoned and died shortly after his release and repatriation leaving Khan behind to support his six younger brothers and three sisters. “That’s when I realised that my education and that of my siblings was my responsibility,” he says with a sigh. Khan became a civil servant and joined the fire brigade after volunteering for them first. At the time, he also sold newspapers and made paper bags to supplement his income. “I [would] see children wandering the streets of Islamabad and would think to myself how different their lives could be if they too could acquire an education,” he shares. Seventeen-year-old Shaan is one of the school’s teachers.  PHOTO: SA’ADIA KHAN In 1986, therefore, Khan accumulated a group of approximately 10 children from the nearby katchi abadis to meet him every day in the marketplace for informal classes. But the group was soon ushered away by perturbed shopkeepers. “Initially it was about trust building — children can be resilient and not so easy to convince,” he says, adding that he also had to convince skeptic parents of his objective to provide an education with no financial cost or burden on them. The initiative attracted more students over time and boasted approximately 300 students by 1987. Today, with an enrollment of 75 children, the unconventional school — functional six days a week, from 3:30pm to sunset — is located on a Capital Development Authority (CDA) owned corner plot opposite a katchi abadi in F6.

Every morning, children of all ages, ranging from six years to 16 years, carry A-stands, blackboards and half a dozen garden chairs and proceed to their allotted space and place their bags and books on the paved floor. Rows are formed gradually and the students wait to commence the day with the national anthem. Khan’s primary objective is to get children into the mainstream educational system, hence, the subjects taught at the school include English, Mathematics, Urdu, History, Social Studies and Islamiat. It is also part of the school tradition for older students to return and teach the younger classes in their spare time. One such college-going student from Saidpur, Farhat Abbas, whom Khan had taken under his wing, says, “Had it not been for Master Ayub I would still not be able to read or write, I would just be collecting wood,” says Abbas. Master Ayub who works as a chief fire officer at the Pakistan Secretariat by day resumes his teaching duties in the afternoon. He teaches the older students at the school.  PHOTO: SA’ADIA KHAN Mohammad Hafiz, who was reluctantly sent by his parents, is today studying for a master’s degree and spends his afternoons teaching the students at the school. “If a child learns just a single word from me, I regard that as a huge achievement,” says Hafiz, who also works for the Directorate of Energy and Disaster Management. According to 38-year old Nadeem Sagar who was under Khan’s tutelage 28 years ago and now works for Red Cross, “Sir Ayub is a very honest person. I don’t have words to express what he has done for me,” he says. “Today when I see my children with a better life than I had, I feel proud of my achievements.”

Khan’s long-term commitment and resolve to educate children has gained him the adulation and respect of many former students. “This is the legacy of 28 years of commitment to educate the poor,” says Khan. With the generosity of others, including young students of Roots Ivy in Rawalpindi who collected Rs40,000 which helped buy supplies such as blackboards, stationary and books, Khan has created a home for learning for generations of students. There is also a donation box at the entrance where children are encouraged to donate even a pencil or rubber. Currently 75 children from the nearby katchi abadi are enrolled at the school. PHOTO: SA’ADIA KHAN

While many have shown willingness to assist, there are some who view Khan’s efforts with suspicion. “Nothing in life is free,” says a nearby resident Nosheen who claims to contribute a small amount of Rs300-Rs400 each month but has no proof of how that money is spent. “The land belongs to the CDA, people make donations because they see a school for the poor. Some items [at the school] are kept and some sold,” adds another resident Manzoor. There was even an attempt to evict Khan and his band of students, but Ahmad Faraz, an acclaimed Urdu poet who passed away in 2008, approached the CDA chairman and insisted that the school should remain open. The plot of land was subsequently cleared, levelled and paved.

“I do not need to prove anything further than what is visible through the success of my students over the past three decades,” says Khan, who is determined to continue his mission of educating those with limited means. He divides his time between the students and his job as the chief fire officer at the Pakistan Secretariat which also helps him pay for some of the supplies for the school. “I am starting to feel weary and tired now, but I will not leave these children in my lifetime,” he says.

Sa’adia Khan is a freelance photographer based in Islamabad. She tweets @IM_SaadiaKhan

Positive Pakistani: Ali Jilani – a step in the right direction