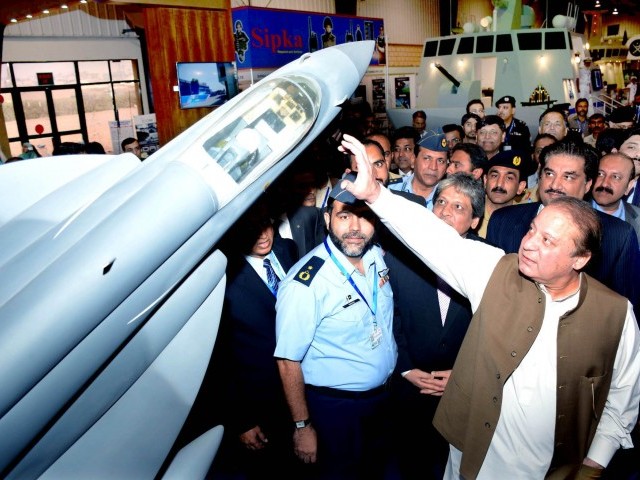 Speaking at the Expo Centre in Karachi on Monday, the premier said the nation is committed to provide its defenders with all the necessary resources for this vital mission.

He said threat to national security has multiplied with emergence of non-state actors including terrorists and computer hackers. “We need to develop new tools and gadgets to effectively deal with these threats, he said.

Appreciating the sacrifices rendered by the armed forces in the war on terror, the prime minister reaffirmed the commitment to make Zarb-e-Azb successful to rid the country of terrorism.

Nawaz Sharif said the government is also mindful of other challenges faced by Pakistan including poverty, illiteracy, under development. “We will lay the foundation of a competitive economy and infrastructure to put the country on the path of sustainable development,” he said.

He pointed out that Pakistan is preparing sophisticated defence products which are cost-effective when compared to other producers. “Several Western countries are also importing defence items from us,” he added.

Nawaz Sharif said Pakistan has the potential and capacity not only to meet its own defence requirements but also that of the world. He said the international community is surprised over the achievements made by Pakistan in the defence field. However there is a need to bring further improvements in the sector, he added.

Speaking on the occasion, Minister for Defence Production Rana Tanveer Hussain said the IDEAS has acquired the status of one of the major defense exhibitions in the region. He said the participating countries would benefit from each other’s knowledge and experiences. He said the exhibition provides a platform for promotion of defense products to Pakistan and other countries and provides an opportunity to establish defense related businesses.

Eighty eight delegations from forty seven countries are participating in the event.