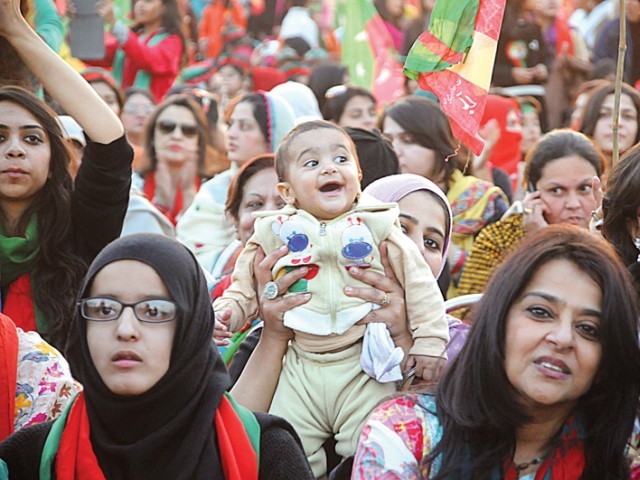 Participants of the rally did not face much difficulty in reaching the venue as the local administration had decided to facilitate them. PHOTO: AGHA MAHROZ/Express

The capital administration had taken foolproof security measures to protect sensitive buildings. The rally organisers had also made their own security arrangements.

Over 15,000 security personnel from Rangers, Frontier Constabulary, Punjab and Azad Jammu and Kashmir police were deployed in and around the Red Zone and at different points of the city.

Special monitoring was conducted through air surveillance and personnel of the special branch were deployed at the venue. Personnel of law enforcement agencies were also deployed on rooftops at all important buildings surrounding the venue. Participants of the rally did not face much difficulty in reaching the venue as the local administration had decided to facilitate them. PHOTO: MUHAMMAD JAVAID/EXPRESS

Ali Nawaz Awan, an organiser of the rally, said the party was satisfied with the overall arrangements except the announcement of imposition of Section 144 and exclusive road obstructions in Khyber-Pakhtunkhwa.

“Hats off to them (organisers),” SSP Asmatullah Junejo, told The Express Tribune.

The SSP said the police and administration stood by their word. “The government’s decision of keeping the roads open proved to be a good one,” he said

A police official present at the sit-in site, requesting anonymity, said previously there was no central command which led to scuffles. This time, selected law enforcers were called and command and control rooms were established.

He admitted that a large number of PTI supporters failed come to the rally because of JUI-F’s protest call.

Meanwhile, the Islamabad Traffic Police (ITP) made special traffic plan to ensure smooth flow of traffic on city’s roads and had even put up posters detailing traffic plans and routes.

Small processions gathered near the police checkpoint at Faizabad around 3pm and later moved together towards the main rally.

Supporters riding bikes, cars, buses and trucks came in from Murree, Gujar Khan and adjoining areas and were joined by a small group of Awami Muslim League.

Workers of PTI’s Rawalpindi youth wing, carrying a huge party flag, walked from Rawalpindi to D-Chowk and chanted slogans against the government and Pakistan Peoples Party.

The procession coming down from Khyber-Pakhtunkwa merged into this procession at Fazal-e-Haq Road.

Two PTI workers, Yasir Rasheed, a jeweler by profession, and Shazeb Khan, a graduate from Peshawar, said they had come here on the call of their leader. They were hopeful of Imran bringing his promised change in the system.

Talking to The Express Tribune, a former PPP tehsil nazim from Murree, who recently joined PTI, said he did so because Imran was the only ray of hope who can bring ‘real change’ in the country.

As the sun went down on Sunday, women supporters of PTI started filling up inside the women enclosure. Just like usual PTI rallies, women decked up and accessorised in party colors could be seen everywhere.

Lady police officers deployed at different entrance and exit points of the rally and PTI volunteers reinsured safety of the participants. With scanners intact, hundreds of women from all across Pakistan made their way through security checks for the rally.

Swiftly making her way through this crowd was thirty-seven-year-old Saba Talat who snaked her wheelchair through a pool of women tactfully parking it at a spot to catch a glimpse of Imran Khan.

Holding a banner with a classic photograph of herself with Imran, Talat recalls the time when the PTI leader had come all the way to her home-town Bahawalnagar to meet her. “He gave me the courage to move forward in life and it is this courage that has brought me here to see him today,” she said.

There were others who covered equally long distances to attend the rally and assure Imran of their support and loyalty. Halima aimlessly wandered around the women enclosure offering her services to paint faces with the PTI flag for Rs30.

Presently unemployed, Halima, along with her two brothers and father has come from Lahore just for the rally. “I am here today to support Imran with my family. We are all face painting here and will return tomorrow” she said.

The capital’s cold failed to dampen participants’ spirits. “We could be out in the cold night for Khan if we have to,” said Halima with a smile.

The split within the party’s Rawalpindi chapter was palpable on Sunday before supporters left for D-Chowk as workers of two opposing groups shouted slogans against each other.

The rift within the PTI Rawalpindi chapter emerged Imran Khan suspended Abbasi, MPAs Arif Abbasi and Raja Rashid Hafeez and other party workers after they beat up security guards manning his (Khan’s) container last month. Later, Khan had tasked Jazi to look after party affairs in the district, sending a wave of anger among Abbasi’s supporters.

Some of Abbasi’s supporters tore Jazi’s posters plastered on a wall but after intervention by senior leaders from both groups, workers moved on towards the venue.

A separate rally consisting of a few workers was also taken out from Lal Haveli, which was led by Rashid Shafiq, nephew of Awami Muslim League chief Sheikh Rasheed who went to D-Chowk alone in his car.

Benazir Bhutto Road remained opened to traffic as the PTI district chapter had assured the local administration that they will not disrupt traffic if they were given smooth passage.

PTI songs were consistently played from loudspeakers mounted on mini-trucks and other vehicles as party workers, holding flags, banners and posters, marched on the capital.

A severe traffic jam was witnessed near Faizabad in the evening after hundreds of vehicles and motorcycles coming from Rawalpindi, Jhelum, Chakwal, Attock and K-P got stuck, causing immense difficulties for other commuters and motorists using the road. Traffic police and rally participants were also seen struggling to regulate traffic flow.

Meanwhile, JUI-F’s Rawalpindi chapter postponed its sit-in at Faizabad to condemn its Sindh leader’s recent murder after the local administration requested them to defer it, fearing a clash between them and incoming PTI workers.