Iqbal — the poet, the philosopher, the man

Iqbal — the poet, the philosopher, the man

The nation­al poet has writte­n so divers­ely that insist­ing on any kind of purity is to read him flippa­ntly.
By Faiza Rahman
Published: November 29, 2014
Tweet Email 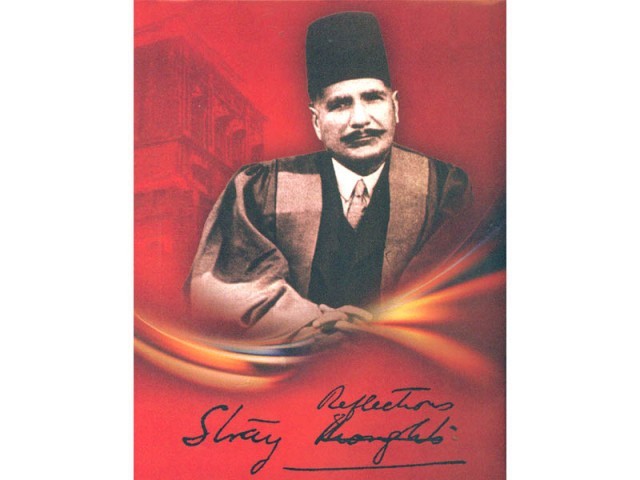 The national poet has written on so much and so diversely that insisting on any kind of purity is to read him flippantly.

Pakistan’s national poet is also its most misunderstood. Allama Iqbal’s personal diary, Stray Reflections (Sang-e-Meel 2014), edited by Javid Iqbal, unveils the man which Pakistan’s national consciousness has long struggled to reckon with, and in failing to do so, has disowned.

Time and again, the conservatives, the right-wingers, the atheists and the believers have used select portions of Iqbal’s work to abet their propagations. Was he a devout Muslim? Was he a non-believer? Was he first a poet and then a philosopher? Or was he first a philosopher and then a poet? Much ink has been spilled and several words have been spoken — all to no avail. So far, attempts to entrap Iqbal’s work in any ideological cocoon have been largely unsuccessful.

It is quite incredible that such projects are still attempted. Iqbal has spoken so much on so many subjects from so many different positions that insisting on any kind of ideological purity is to read him flippantly. He is a left-winger, a right-winger, a believer, an atheist, a conservative and a liberal in turns and if his poetry were not evidence enough to prove this, his essays are, his lectures are, his notebook, Stray Reflections, in which records his careless thoughts, is. In this notebook, which he never wished to publish in his lifetime, Iqbal was able use his pen in the delicious freedom of secrecy. His entries comprise of short sentences on subjects as assorted as the political future of Afghanistan, the poetic relevance of infinity, the virtues of self-control, Shakespeare, Ghalib, Goethe and Hafiz. Despite the carefreeness of his thoughts, his sentences are taut and his words crisp and somehow his prose strums with the musicality of poetry. One diary entry begins and ends thus, “The psychologist swims, the poet dives” and another thus, “power toucheth falsehood and lo! It is transformed into truth.” In the Bang-e-Dara, he might have written, “Hai wohi saaz-e-kuhn Maghrib ka jamhoori nizam/Jis ke pardon mein nahi ghair az nawa-e-Qaisari” (The Western democratic system is the same old orchestra/Its notes have nothing but the melodies of Caesar) but in Stray Reflections, while brainstorming on democracy, he writes, “Democracy has a tendency to foster the spirit of legality. This is not in itself bad….”. While giving a humble benefit of doubt to the system of governance he indicates how it is not democracy per se but the mediocre implementation of democracy that irks him. It is through these writings here that we realise that ripping apart a few sentences from Iqbal’s books as evidence of his sanction for select political arguments is a practice sloppy at best.

Similarly, on matters unearthly, Iqbal has often emerged as a fierce defender of the oneness of God (the principle of tawhid), and a pan-Islamist (emerging as a defender of ‘Muslim values’ much to the glee of some present-day Muslim scholars who like to treat ‘Iqbalian thought’ as the nemesis of ‘non-Islamic’ thought. All of these terms defined, of course, as per their own psychological comfort). But then, what to make of Iqbal the sceptic who, in the Shikwa, churns out an avalanche of reproach for the same God? What to make of the Iqbal who, in Stray Reflections, scribbles, “Sin has an educative value of its own. Virtuous people are very often stupid”? What to make of the Iqbal who, through the Falsafa-e-Khudi, gives man an agency similar to that of God? No, these apparent inconsistencies do not indicate the mix-ups of an unlearned man, but the magnificence of a mind which bustles to and fro in restless intelligence.

If the complete index of Iqbal’s work is negotiated even sparingly, it becomes possible to detect an almost linear trend of how time and age have made and undone his verdicts. It becomes clear that Iqbal’s engagement with a number of thinkers, his exhaustive application to books, his constant state of learning had left no room for any kind of stolid permanence. It becomes clear, then, that the ‘contradictions of Iqbal’ only exist in an intellectual space which demands a dishonest and otherworldly kind of consistency from human faculties. In 1904, Iqbal’s pen commemorated Indian nationalism through a number of patriotic poems (saray jahan se acha Hindustan humara) but from 1905 onwards, Iqbal acquired distaste for the state as a political entity. In Stray Reflections he writes, “And what is patriotism but a subtle form of idolatory; a deification of a material object.” Again, this shift is not one of fickleness, but one of careful rediscovery. In 1905, at the age of 28, Iqbal studied for a doctoral degree in Europe where the libraries of Cambridge, Munich and London beckoned to him. He kept writing all the while: essays against previously-held nationalist views, nazms against the materialism of the West, fervent letters to his friend, Atiya Fayzee. His confusions, his confessions, his regrets and his joys all are out there in his writings, the volume of which is immense and the subjects of which are many; none of it can be jostled into a tight ideological cocoon without a compromise of honesty and accuracy. Scholars have argued that this inherent fluidity of intellectual output, marked with so much positional diversity, makes it difficult to place Iqbal in the league of philosophers. Others, however, have argued that Iqbal did shift the boundaries of philosophy for the Falsafa-e-Khudi is embedded in a fresh metaphysical framework. These arguments have now become politicised, with proponents of each making punitive cliques, and accusing others of pandering to a political agenda of smearing the ‘originality’ of Iqbal. What remains uncontested amongst all, however, is Iqbal’s status as a poet. Yes, his mind might have braved the onslaughts of competing philosophical systems, and perhaps even produced one in the process, but his pen strung every crusade into poetry, and the merit of poetry is far above and beyond the quarrels of what is and isn’t the truth. In Stray Reflections, Iqbal writes, “Philosophy ages; poetry rejenuvates”, probably putting in his own two cents to the issue.

All in all, Stray Reflections assists in the crucial understanding that Allama Iqbal was no monolith.