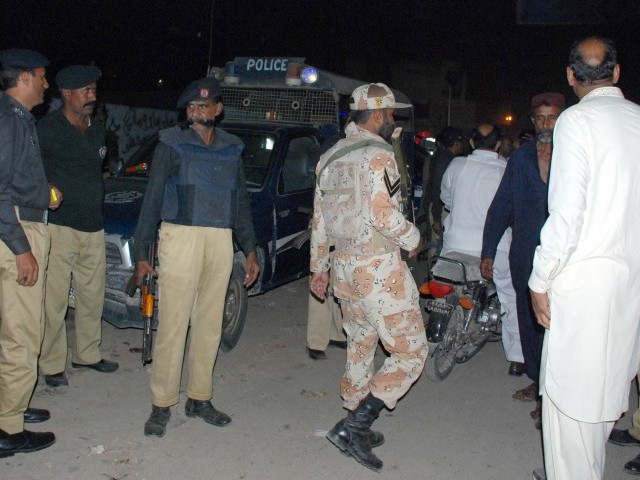 Police and Rangers officials inspect the site of a blast in Hyderabad on Saturday evening. PHOTO: SHAHID ALI/EXPRESS

HYDERABAD: A boy was killed while three other people were injured when armed assailants attacked a police van with an improvised explosive device (IED) near the Agriculture complex apartments in Hyderabad on Saturday evening.

Two assailants riding a motorbike hurled the IED at a GOR police station van in which DSP Anwar Durrani and SHO Hassan Dal were sitting. The attackers escaped after the attack.

The police van was parked near a roadside hotel and a number of stores. 12 year-old Zaheer Ahmed, who was passing by, suffered critical injuries.

The injured were shifted to Civil Hospital Hyderabad where Ahmed succumbed to his injuries. He was a resident of Baban Shah Colony.

The others injured in the attack were identified as Abdul Ghafoor Chandio, 40, Mohammed Sachal Butt and Nadeem Qureshi.

The police believe the attack was a precursor to the strike call issued for Sunday by the banned outfit Jeay Sindh Muttahida Mahaz.

On Saturday evening three Rangers personnel and a passerby were wounded in a hand grenade attack in Lyari.

SSP Sheeraz Nazeer  said armed motorcyclists had hurled the grenade at a Rangers check post at Kamaila Stop in Lyari.

The injured were immediately taken to Civil Hospital, Karachi, for medical treatment.

The officer said that the injured persons were out of danger, adding that gangsters from Lyari were believed to be behind the attack.

Shortly after the attack, the area was cordoned off and a search was started to apprehend the culprits.

Zulfiqar Khosa in Karachi to constitute forward block of PML-N