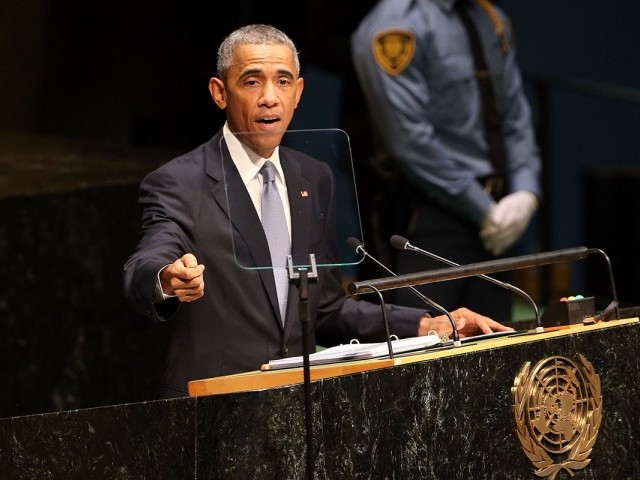 A file photo of President Barack Obama speaking at the 69th Session of the United Nations General Assembly on September 24, 2014. PHOTO: AFP

President Barack Obama has extended the combat role for US troops in Afghanistan for another year, in a classified order he signed in recent weeks, the New York Times reported on Friday. Previously, the president had said US-led Nato combat operations would finish by the end of this year.

The Nato follow-up mission, to take over on January 1 with 9,800 US troops and about 3,000 soldiers from Germany, Italy and other member nations, was to focus on supporting Afghan forces as they take on the Taliban, in parallel with US counter-terrorism operations.

But in a strategic shift, the New York Times reported, Obama signed an order authorising US troops to carry out missions against militant groups in 2015. The new order also allows for air support — from US jets, bombers and drones — for Afghan combat missions.

The newspaper said civilian advisers argued against the broader mission for 2015, objecting to putting American lives in danger in the fight against the Taliban and recommending a narrower, counter-terrorism focus against al Qaeda.

“There was a school of thought that wanted the mission to be very limited, focused solely on al Qaeda,” one American official told the paper. But, the official said, “The military pretty much got what it wanted.”

However, a senior official told the New York Times that US forces next year would not carry out regular patrols against the Taliban. “We will no longer target belligerents solely because they are members of the Taliban,” the official said.

It also said that new Afghan president Ashraf Ghani was more open to accepting a wide-ranging US military mission than his predecessor Hamid Karzai.

Earlier this month, US defence officials had said commanders were weighing a delay in withdrawing American troops from Afghanistan after the country’s protracted election set back preparations for the transition.

The new head of the Nato-led force in Afghanistan, General John Campbell, and other senior officers were reviewing whether a larger force needs to stay in place longer than initially planned, officials said.