Faiz will be rememb­ered as a poet, vision­ary, philos­opher and symbol of hope.
Published: November 21, 2010
Tweet Email 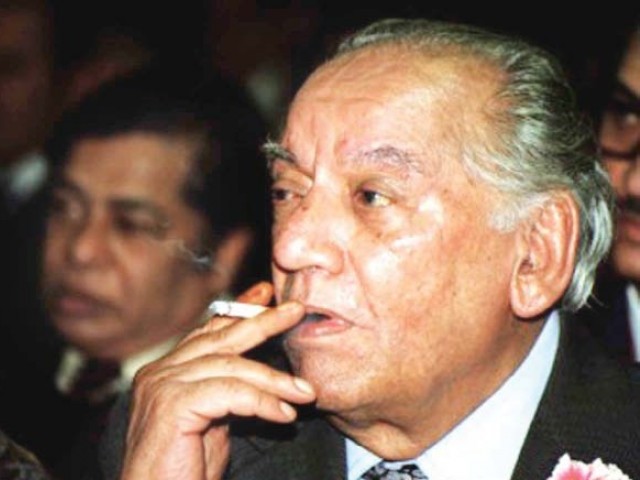 Faiz will be remembered as a poet, visionary, philosopher and symbol of hope. photo: file

KARACHI: Faiz Ahmed Faiz, the man who “stirred human conscience,” passed away on November 20, 1984, but 26 years later the poet’s message of hope and peace remains as relevant and necessary as it was during his time.

Faiz was born in 1911 in Sialkot. In the 1930s, he came under the influence of the anti-fascist, pro-socialist Progressive Writers’ Movement. A few years later, Faiz became one of the founders of the Progressive Writers Association.

During the Second World War, he served in the British Indian army in Delhi. After independence in 1947, he resigned from the army, moved to Lahore and became the editor of the leftist-English language daily, Pakistan Times. He also served as managing editor of the Urdu daily Imroz.

Faiz, a Marxian activist, won the Lenin Peace Prize by the Soviet Union in 1962. He was associated with the Communist Party of Pakistan and leftist leaders like Sajjad Zaheer, Hasan Nasir and Major Ishaq. Deeply saddened by their demise, Faiz wrote poems for Zaheer and Ishaq, who have also written the preface of his book Zindan-nama.

As secretary of the Pakistan Peace Committee formed after partition, he worked to establish peace between India and Pakistan. A UK-based newspaper called Faiz “a brave enough man to fly from Lahore to Delhi for Gandhi’s funeral at the height of Indo-Pakistan hatred,” as quoted in the ‘Requiem for an unsung messiah.”

Faiz had much respect and admiration for Mahatma Gandhi as was obvious in an editorial called “Long live Gandhiji!” that he wrote for the Pakistan Times in February 1948. “Though he is dead, he will live through ageless time,” Faiz wrote.

The poet was arrested in 1951 for the Rawalpindi conspiracy case and spent the next four years mostly in solitary confinement. After the sentence was announced, in a telegram to his wife Alys, Faiz said: “Now it’s over: we can start counting the days.” In solitude and exposed to harsh realities of life, Faiz wrote two of his greatest works Dast-e-Saba and Zindan-Nama.

A symbol of resistance, Faiz went into self- exile in Beirut when General Ziaul Haq came to power after a military coup. During this period, Faiz wandered from country to country and wrote a poem that highlights his pain away from home. In a poem called ‘Meray dil meray musafir, Faiz wrote “har ik ajabi se poochain, jo patta tha apnay ghar ka” (Asking every stranger where one’s home was)

The poet’s humanity transcends geographical, cultural and religious boundaries. He wrote about the plight of Palestine, students of Iran and the people of Africa. In the book Poetry East, Carlo Coppola calls him “a spokesperson for the world’s voiceless and suffering people.”

In an interview by I A Rehman in 1984, Faiz said he was a man of peace because in his childhood he was “surrounded by women, widows and orphans who had suffered terribly.”

Faiz will be remembered for all times to come as a poet, visionary, philosopher, teacher, mentor and a symbol of hope for all those who continue to strive for a society based on justice and equality. He shall always remain a beacon of hope. As Faiz himself put it “hum dekhain gain”.