Army chief says phenom­enon of IS will not be allowe­d in Pakist­an and Afghan­istan
By Web Desk / APP
Published: November 20, 2014
Tweet Email 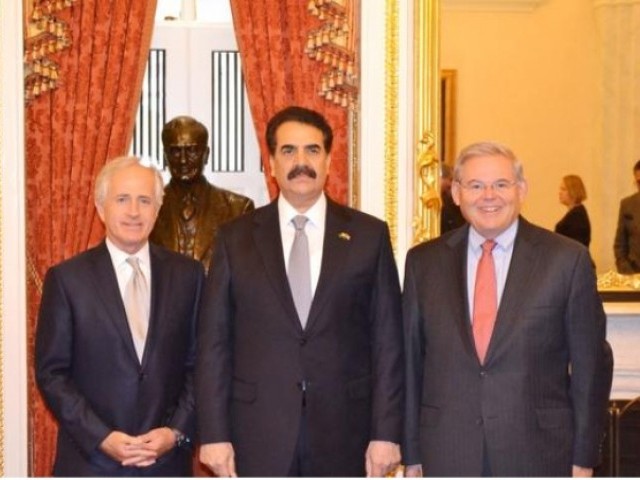 UNITED STATES: Army chief General Raheel Sharif on Thursday said the ongoing operation Zarb-e-Azb in North Waziristan was targeting all militants without any discrimination and was aimed at defeating militancy squarely.

Gen Raheel’s statement comes a few days after prime minister’s senior aide Sartaj Aziz – in an interview to BBC Urdu – questioned why Pakistan should target militant groups that do not pose a threat to its security.

Addressing a reception hosted in his honour, General Raheel said the operation was against militants of all hues and colors. “It is without any discrimination, whether it is Haqqani network, TTP or any other group,” The army chief affirmed

Hosted by Pakistan’s Ambassador to the United States Jalil Abbas Jilani for the visiting military delegation, the reception was attended by senior American officials from the state and defense departments, including US Special Representative for Pakistan and Afghanistan Dan Feldman.

The army chief further said the military operation against militants was launched with great commitment and sincerity, after consultations with the government and support of the entire nation.

“Zarb-e-Azb is not just a military offensive but is a concept to defeat terrorism in all its forms and manifestations. The anti-terror campaign is not restricted to Waziristan and Khyber tribal areas but covers the whole country,” he said.

General Raheel also expressed confidence in progress towards establishing peace and stability in the region under the administration of new Afghan President Ashraf Ghani.

Commenting on the growing concerns in relation to the militant group Islamic State (IS), the army chief said the phenomenon of IS will not be allowed in Pakistan and Afghanistan. IS fighters have captured swathes of Iraq and Syria in a drive to set up a self-declared caliphate.

He also expressed satisfaction over his visit to the United States and said he had positive meetings with his counterparts on military-to-military relationship.

Further speaking at the occasion, Ambassador Jilani affirmed Pakistan’s determination to combat terrorism and improve relations with Afghanistan as Nato troops prepare to pull out.

He pointed out these developments require closer Pakistan-US cooperation.

“On the one hand, things are looking up but new challenges are also emerging which require good cooperation between our two countries.”

The ambassador added the defense relations are an important component of the wide-ranging Pakistan-US relationship.

General Raheel and Rice held in-depth discussions on the ongoing Pakistan-US security issues and expressed satisfaction on the overall positive trajectory in the bilateral relationship. Both sides reaffirmed their mutual desire and commitment to strengthen their relationship.

He also briefed Rice on the current situation in the region, including violation of ceasefire and shelling by India on Line of Control and the working boundary.

Meetings with members of Senate committees

During his tour of the US, Gen Raheel also held meetings with members of the Senate Foreign Relations Committee, Senate Armed Services Committee and the Select Committee on Intelligence.

Member of Foreign Relations and the Armed Services Committees, Senator John McCain was also present at the meeting.

According to ISPR, the committees lauded the successful operations of the security forces and destruction of militants’ command and control infrastructure in North Waziristan.

During the meeting, US senators were also briefed on Pakistan’s plans to rehabilitate the displaced people of Waziristan as soon as possible.

Earlier, Chair of the Select Intelligence Committee, Senator Dianne Feinstein along with other key members also met Gen Raheel and his delegation.

Both sides discussed a range of issues related to bilateral security cooperation and expressed a strong desire to continue and intensify this partnership in the coming months.

“They also emphasised the importance of sustained and substantive dialogue as we continue to develop bilateral military-to-military relationship,” Kirby added in a statement following the Pentagon talks

General Raheel Sharif is in Washington for his first official visit to the United States on the invitation of the US Army Chief.