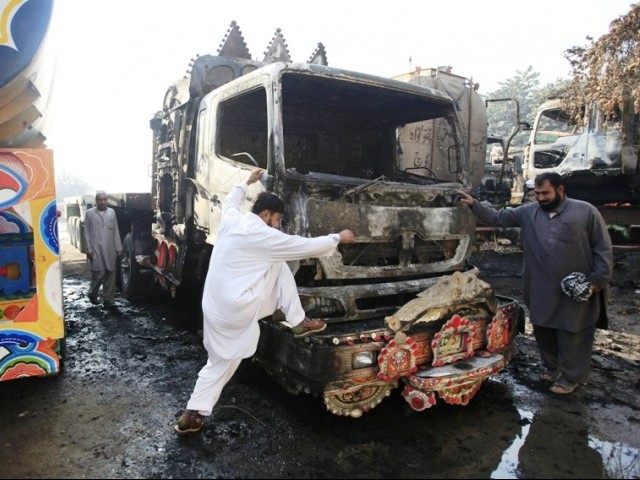 Men survey a damaged oil tanker, used for supplying fuel for NATO forces in Afghanistan, after they were attacked in the outskirts of Peshawar November 20, 2010. PHOTO: REUTERS

The tankers were parked in a workshop for Nato vehicles on Ring Road when more than 24 gunmen attacked them. Police said no casualties were reported.

Bomb Disposal Squad (BDS) officials also found and disposed off a bomb near the attack site.

Investigations are underway as police officials detained one of the security guards of the workshop.

The Ring Road was closed for traffic as the fire was put out by firefighters after hectic efforts.

No one claimed responsibility for the attack but Taliban  militants have in the past targeted supplies trucked through Pakistan for coalition forces fighting insurgents in landlocked Afghanistan.

The bulk of supplies and equipment required by foreign troops in Afghanistan is shipped through the Khyber region.

Scores of Nato supply vehicles have been destroyed in gun and arson attacks as Taliban militants have stepped up efforts to disrupt the route.