Toss in focus for Misbah and McCullum

Toss in focus for Misbah and McCullum

Both skippe­rs lay emphas­is on the advant­age of battin­g first
By AFP
Published: November 16, 2014
Tweet Email 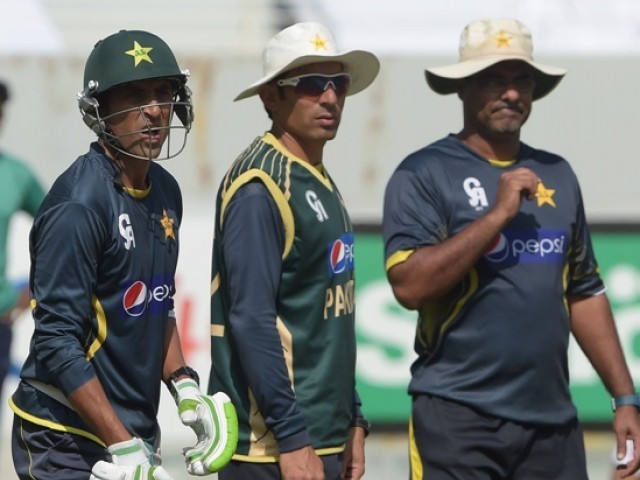 Misbah said his team will be ready to bat second if they lose the toss. PHOTO: AFP

DUBAI: Rival captains Brendon McCullum and Misbah-ul Haq agreed Sunday that winning the toss would be important to the outcome of the second Test between Pakistan and New Zealand starting here on Monday.

McCullum called heads and it came out tails in the toss in the first Test in Abu Dhabi which Pakistan won by 248 runs last week for a 1-0 lead in the three-match series.

“It will be a pretty important toss, from what happened in the last game,” said McCullum.

“We have made some improvements from our last match. I am confident my guys will step up and make some adjustments and put in a good performance.”

New Zealand’s trial by spin will continue as the Dubai stadium pitch is likely to take more turn, a challenge McCullum was ready for.

“I spoke to someone the other day who said it is going to be a juicy wicket and when I asked if it was juicy for seam he said it is juicy for spin. It does not surprise me. You have to expect this when you come to this part of the world,” said McCullum.

“We were slightly deficient in our last game and reverse swing played quite a big part so we will try and do a little bit of tweaking in terms of how we go about playing reverse swing,” said the New Zealand captain.

“Their spinners bowled really well the other day and once again it is a matter of learning the lessons. The only way to learn these lessons is by actually going out and confronting them.”

McCullum said he hoped his team matches their comeback of the last series against the West Indies in June this year.

“One of the things we pride ourselves is on making subtle adjustment when we are caught short. In the previous series for example in the West Indies we staged a comeback,” he said.

“The toss is very crucial in terms of allowing us a chance to win the game but it does not mean that is the end of it.”

Misbah said his team will be ready to bat second if they lose the toss.

“Sometimes it is an advantage but obviously it is out of our control, but the good thing is that we are batting well in the second innings as well so when the wicket gets slower even in that time we are batting well so in terms of our batting we are confident and we need to be ready even if we lose the toss,” he added.

Pakistan will be without opener Ahmed Shehzad who suffered a minor skull fracture after being hit by a Corey Anderson bouncer in the first Test where he made his highest Test score of 176.

“At times it is a little bit of a concern but we have two openers who have done well in the past and they can fill in,” said Misbah.

Taufeeq Umar is likely to replace Shehzad while Shan Masood can fill in for Hafeez.