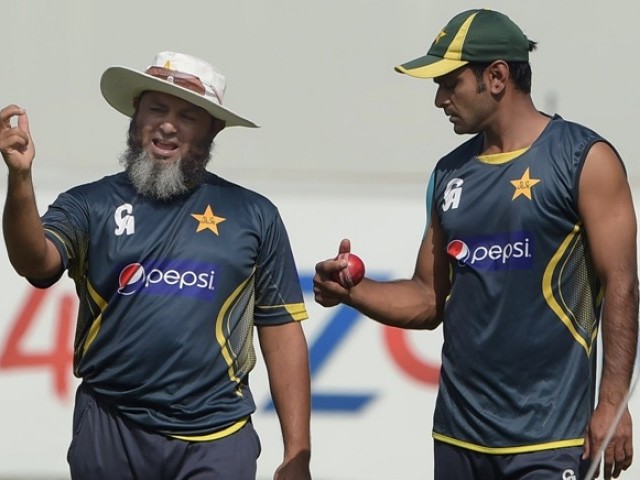 Hafeez scored an unbeaten hundred in the first Test in Abu Dhabi which Pakistan won by 248 runs. PHOTO: AFP

DUBAI: Pakistan may have to play with two new openers in the second Test against New Zealand starting in Dubai from Monday, after all-rounder Mohammad Hafeez suffered a hamstring injury and was listed as doubtful.

Hafeez scored an unbeaten hundred in the first Test in Abu Dhabi which Pakistan won by 248 runs, taking a 1-0 lead in the three-match series.

“As of today Hafeez is doubtful and we are assessing his hamstring injury and will take a final call on him on Monday,” Moin told AFP.

In addition to his batting, Hafeez gives Pakistan an option of a fifth bowler with his off-spin.

But his action also came under scrutiny after it was reported as suspect during the first Test by match officials.

Hafeez has 21 days to undergo a bio-mechanic analysis of his action but during this period he is allowed to bowl in international cricket.

Pakistan is already without in-form opener Ahmed Shehzad who scored a career-best 176 in the first Test but was ruled out of the last two matches after suffering a minor skull fracture on being hit by a Corey Anderson bouncer.

Experienced opener Taufeeq Umar will likely replace Shehzad and if Hafeez is also missing, Shan Masood will fill in.