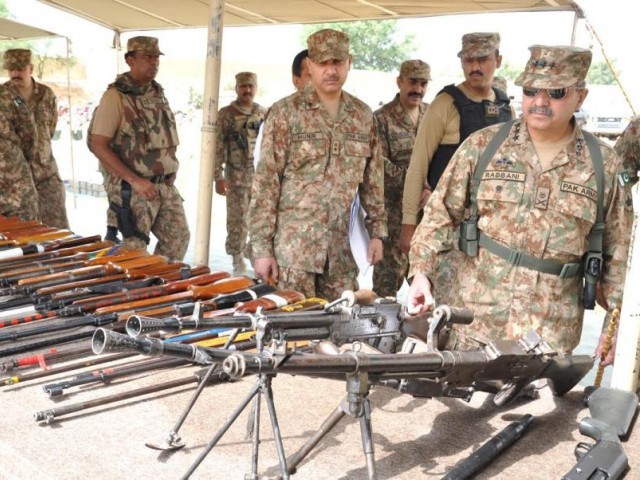 MIR ALI: Pakistan Army has so far cleared 90 per cent of North Waziristan Agency (NWA) of terrorists and eliminated the Haqqani network and East Turkistan Movement from the area, commander of Operation Zarb-e-Azb Major General Zafarullah Khan said on Saturday.

He said forces killed 1,198 terrorists and injured 356 during the on-going military operation launched in June this year.

“So far 2,708 square kilometre of area has been vacated while the remaining area would be cleared as early as possible,” he said.

He, however, said that the return of Temporarily Displaced Persons (TDPs) to their homes would be possible after removal of land mines and improvised explosive devices (IEDs) laid by the terrorists, which would take time.

“In an across the board military operation against foreign and local terrorists hiding in North Wazirastan, we have also made major recoveries of weapons, ammunition, explosives, IEDs, and their manufacturing facilities,” he told reporters, who were especially flown to Mir Ali and Miranmshah for a briefing.

Regarding own combat casualties, he informed that during the course of the operation, Pakistan Army has so far suffered a total of 197 casualties.

Consequent to this clearance, some terrorists relocated themselves to the peripheral and adjoining areas to offer continuous resistance. Hence the scope of operation was enhanced, terrorists were chased and clearance of peripheral areas commenced.

He also dispelled the impression that there were some good or bad terrorists, adding that the military operation is ongoing against all the terrorists whether they are local or foreigners.