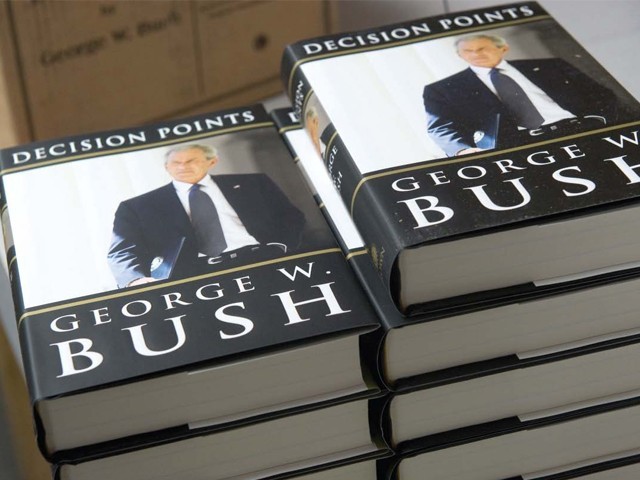 ISLAMABAD: Former US president George W Bush has disclosed, after exactly three years, that former Pakistani president General Pervez Musharraf resigned from the post of chief of army staff, lifted the emergency and held free elections upon his “strong suggestion” in the fall of 2007.

Bush also confirmed for the first time that he authorised his military’s use of drone attacks within Pakistan after the Taliban exploited the worsening political situation in the country and heightened their operation in Afghanistan which led to an increase in violence and forced many Afghans to turn against their government and Nato forces. Bush has also alleged that “some” in the Pakistani intelligence agency (ISI) retained ties with Taliban officials despite making a commitment with Washington to side with American forces.

The former US president made these and other disclosures in his autobiography titled “Decision Points” which hit the stalls in the United States last week.

In an exclusive chapter on “Afghanistan”, which also deals with Pakistan, Bush revealed how he had made the decision to invade Kabul post 9/11 and how over just one telephone call from his Secretary of State Colin Powell, Musharraf had agreed to cooperate in the American war against the Taliban in Afghanistan and to accept a list of “non-negotiable” demands handed over to Islamabad.

Narrating the role of Musharraf in his war against the Taliban, Bush has written that on September 13, Colin Powell called Musharraf and made clear that the former president had to decide whose side he was on. He was presented with a list of non-negotiable demands, including condemning the 9/11 attacks, denying al Qaeda a safe haven in Pakistan, sharing intelligence, granting the US over-flight rights and breaking diplomatic ties with the Taliban.

Musharraf was facing intense internal pressure at the time. Turning against the Taliban was unthinkable for hardliners in his government and the intelligence service. Bush wrote that he called Musharraf from Camp David during a break in the war council meeting. “I want to thank you for listening to our sad nation’s requests and I look forward to working with you to bring these people to justice,” I said. “The stakes are high. We are with you,” Musharraf had told the American president.

Providing a background of the nature of relationship with Pakistan and how he had made the former military leadership of the country fall in line, Bush wrote in his book, “Our relationship with Pakistan proved complex. But within four days of the 9/11 attacks, we had turned Afghanistan’s pivotal neighbour from a supporter of the Taliban to a partner in removing them from power. The primary cause of trouble did not originate from Afghanistan or as some suggested from Iraq. It came from Pakistan. For most of my presidency, Pakistan was led by president Musharraf. I admired his decision to side with the Americans after 9/11. He held parliamentary elections in 2002, which his party won and spoke about “modern enlightenment” as an alternative to Islamic extremism. He took a serious risk to battle al Qaeda. Terrorists tried to assassinate him at least four times. In the months after we liberated Afghanistan, I told Musharraf I was troubled by reports of al Qaeda and Taliban forces fleeing into the loosely governed tribal areas of Pakistan   an area often compared to the wild west. I would be more than willing to send my special forces across the border to clean out the areas, I said.”

“Musharraf told me that sending Americans troops to combat in Pakistan would be viewed as a violation of Pakistan’s sovereignty. A revolt would likely ensue. His government would probably fall. Extremists would take over the country including his nuclear arsenal. In that case, I told him his soldiers needed to take the lead. For several years, the arrangement worked. Pakistani forces netted hundreds of terrorists including al Qaeda leaders like Khalid Sheikh Mohammad, Abu Zubaydah and Abu Faraj al Libbi. Musharraf also arrested Dr AQ Khan.