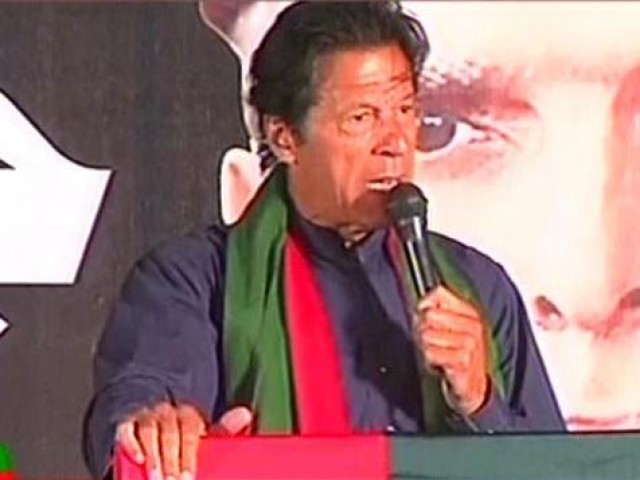 RAHIM YAR KHAN: Withdrawing from his earlier demand of Prime Minister Nawaz’s resignation, Pakistan Tehreek-e-Insaf (PTI) chairman Imran Khan has said his party will end the Islamabad sit-in if his claim of rigging in general elections of 2013 is proven otherwise.

While addressing the PTI rally in Rahim Yar Khan on Sunday evening, the PTI chairman asked Nawaz to resume dialogue with his party, and constitute a commission under Supreme Court to investigate the alleged electoral fraud.

“Mian sb, I offer you to form a commission under Supreme Court to investigate 2013 elections,” he said.

However, Imran said, if his allegations are proven right, the premier will have to step down.

“If the commission’s accepts fraud in elections, you [Nawaz] will have to resign and hold new elections.”

He said the commission should also include officials from Military Intelligence and Inter Services Intelligence agency, while the report should be finalised within four to six weeks.

It is worth mentioning that the prime minister in his address to the nation on August 12, 2014 requested the Supreme Court Chief Justice to form a three-member commission to probe allegations of rigging and present their findings.

Reiterating his resolve to make a new Pakistan, PTI chief said a sea of people will enter Islamabad on November 30, adding that it will be the biggest protest in the history of Islamabad.

“We respect you but do not trust you that you will remain impartial,” he said. “You should not become the election commissioner.”

Imran also announced the schedule of his upcoming protests in the country.

He said the PTI ‘tsunami’ will reach Nankana Sahib on Wednesday, November 12, Sahiwal on Saturday, on Sunday it will be in Jhelum while a protest is also scheduled in Gujranwala on Wendesday, November 19.

“We will reach Larkana on November 21,” he added.

Winter solution: Jul Bujh your geyser at the press of a button