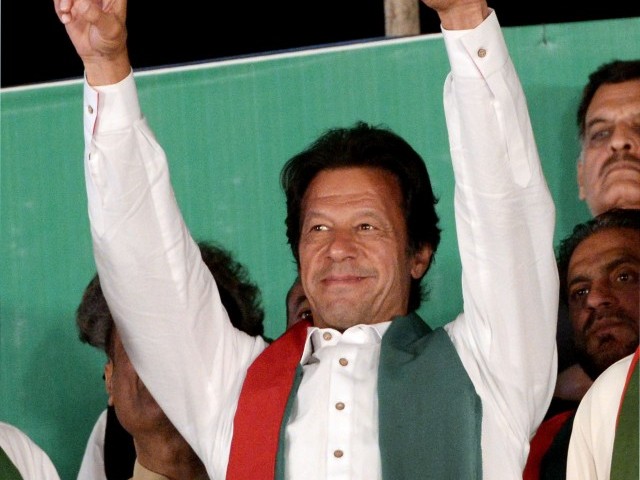 ISLAMABAD: Pakistan Tehreek-e-Insaf (PTI) chief Imran Khan on Thursday announced that he would end his ongoing sit-in in case rigging allegations are not proved in an investigation conducted by the Supreme Court.

“The Supreme Court should investigate the rigging allegations in one month under Justice retd Nasir Aslam Zahid. The PTI would end its sit-in if our allegations proven wrong,” Imran said while addressing his sit-in in Islamabad on its 85 day.

While making commitment of ending the sit-in, Khan also put a condition that “in case rigging is proved then resignation of Prime Minister Nawaz Sharif should be ensured.”

In his speech, Khan also opposed the idea of making the idea of carving out new provinces in the country.

The PTI chairman also vowed to bring back the looted national money from the foreign backs after coming to power and to hold corrupt leaders accountable for their deeds.

A day after the protesting Pakistan Tehreek-e-Insaf hinted at a way out of the political impasse, the government has said it is ready for talks, Radio Pakistan reported.

In a statement, Information Minister Pervez Rasheed said that the government is ready for dialogue with PTI when and where they want.

He asked PTI chief Imran Khan to empower his Vice Chairman Shah Mahmood Qureshi for holding talks with the government.

Rasheed added that they are ready to resume dialogue once Finance Minister Ishaq Dar returns.

Late on Thursday, Senator Rehman Malik said that the political jirga had will pave the way for talks between the government and Imran Khan.

In multiple tweets, Malik said that the jirga would review Imran’s proposal for ending the political impasse once the senator returns from his visit abroad.

Part 1.i had telephonic discussions with SIraj ul Haq Amir JI wherein the desire of Jirga for dialogue between IK and was conveyed to IK

proposal of IK shall be discussed on my Return from abroad /Jirga will give way forward to govt and IK IA.we hv positive signals from both

Malik, who was part of the opposition’s political jirga, added that the jirga had played a positive role which had enabled Dr Tahirul Qadri to end his sit-in. Similarly, the jirga will continue its efforts to bring PTI and the government to the table again.

Jirga played positive role enable TUQ to end Darana/Jirga will continue to bring PTI and govt on the table once again.IK and PM to cooperate