Just like in the first inning­s, record­s contin­ue to be broken.
By Our Correspondent
Published: November 3, 2014
Tweet Email 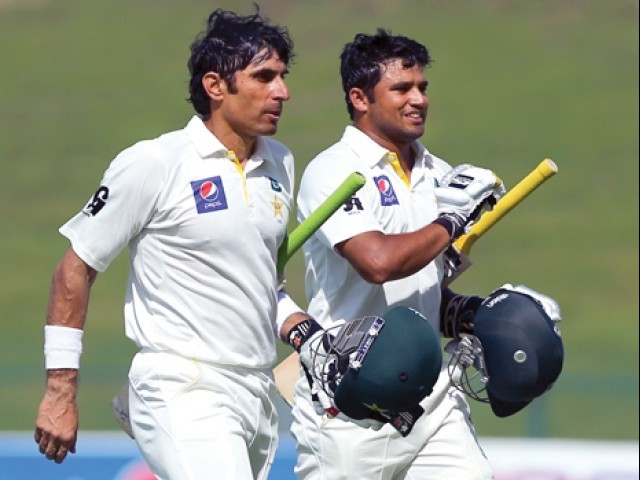 A jubilant Azhar Ali and Misbahul Haq walk off after having scored centuries in both innings of the Test, including a joint-fastest Test century by the skipper. PHOTO: AFP

Australia are staring down the barrel of a big defeat as they ended day four of the second Test 460 runs behind, with just six wickets in hand.

Misbahul Haq scored the joint-fastest century in Test history as he and Azhar Ali scored tons in both innings of the match at the Sheikh Zayed Stadium.

Steve Smith was unbeaten on 38, while Mitchell Marsh was with him on 26 at stumps but the Australians haven’t yet thrown in the towel.“We still have six wickets remaining so it’s very important to fight hard,” said Australia coach Darren Lehmann. “We’ve been outplayed again, so we need to go back to the drawing board, but tomorrow [Monday] is an important day for us.”

Chasing a mammoth target of 604, Australia’s vows against the spinners continued as opener Chris Rodgers was dismissed early by left-arm spinner Zulfiqar Babar on two.

However, David Warner continued fighting from the other end and consolidated the innings with Steve Smith. But a rush of blood brought an end to Warner’s innings as he skied a slog-sweep against Muhammad Hafeez, which was easily caught by Yasir Shah at point.

“Pakistan have done well in the two Tests and have scored a lot of runs in their first innings,” continued Lehmann. “Misbah should have been out early but it was very good hitting from him. He played positively in the situation; it was an entertaining knock so congratulations to him for the record.”

Pakistan had resumed day four on 61-2, with Azhar aggressive in his approach, while Younus Khan was more subtle. However, Younus could not achieve the record of scoring four consecutive centuries when he was trapped in front of the wicket by Smith on 46.

In came Misbah and went after almost every ball from the get-go, including three sixes and a four in one over off Smith.

Misbah struck five sixes and 11 boundaries in his 57-ball 101, at an astounding strike rate of 177.19. Azhar completed his century two balls later and Misbah declared the innings on 293-3 after 60.4 overs, with Pakistan scoring at a run rate of 4.85 per over.

Records continued to tumble as this was only the second time in history that two batsmen scored centuries in each innings of the match. With the feat, Misbah and Azhar became only the eighth and ninth Pakistani players to score hundreds in both innings.

Pakistan also equalled the record for most centuries against Australia in a series. However, the skipper feels that the records will mean nothing if they fail to lead to a victory tomorrow. “The records are important but the most important thing for us will be to come out tomorrow and win the Test match,” said Misbah. “It’s important that we get the job done by finishing this match off and winning the series in style.”