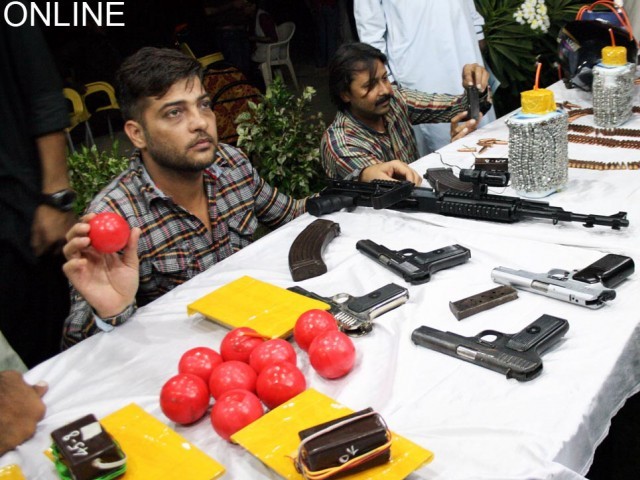 KARACHI: The Crime Investigation Department (CID) of Sindh Police on Saturday claimed to have foiled a major act of terrorism aimed at disrupting 9 and 10 Muharram by arresting a would-be suicide bomber along with his four accomplices.

The arrests were made during a raid conducted by CID’s Anti-Extremist Cell in Kunwari Colony area of Manghopir, Karachi.

Raza further claimed to have recovered a huge cache of weapons and improvised bombs from their possession.

The AEC in-charge claimed that the militants were planning to attack one of the main processions on 9 and 10 Muharram in Karachi.

“For this purpose, they had also prepared an explosive-laden motorcycle to carry out an attack,” Raza explained. “The arrested suspect, Shaikh was supposed to leave for the suicide bombing, on a motorcycle.”

He said that the suspects are believed to be involved in over 15 cases of political and sectarian target killings, as well as attacks on law enforcement agencies.

The group was involved in hiring young men from Karachi and sending them to Waziristan for militant training, the officer added.

Earlier, during the week, 12 suspected militants of al Qaeda and the Taliban were killed by District Malir police in Sohrab Goth and Malir areas in two separate encounters.

They were also planning to carry out attacks in Muharram.

At least six people were injured in a cracker blast in Orangi Town on Sunday evening.

The explosion took place at Sector 5-E in Orangi Town, within the limits of Pirabad police station.

As a result, six people were hurt. They were taken to the Abbasi Shaheed Hospital.

Following the attack, an extra contingent of police and Rangers reached the site and collected the evidences, while the bomb disposal squad was also called at the blast site.