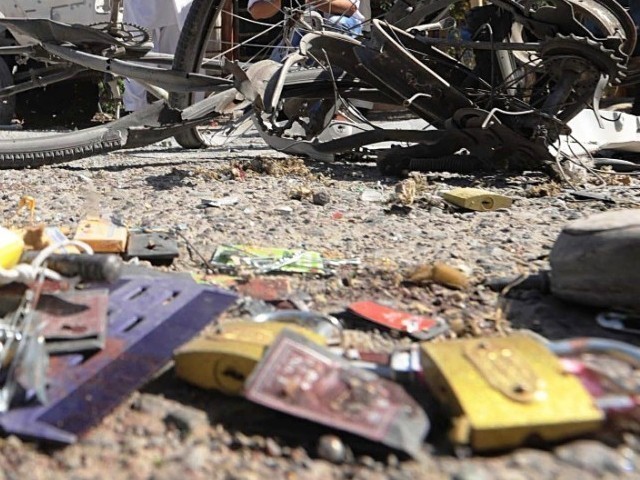 It has not yet been disclosed whether there was a high ranking official among the injured. PHOTO: AFP

HANGU: In a brazen militant attack on a security forces checkpost in lower Orakzai Agency on Saturday morning, at least eight security officials and twenty militants were killed.

Five security officials were also injured in the exchange of fire.

An official of the security forces from the area said that the attack took place at around 3:00am when around 50 armed militants attacked their checkpost in Sherin Darra area.

“Zawan checkpost came under heavy attack in the region,” the official added, explaining that the militants had arrived from Akka Khel area of Bara in Khyber Agency.

The official added that in the first attack, the Orakzai Scouts managed to retaliate. However, as more militants poured in, a second wave of attacks left at least six officials dead. Two more officials succumbed to their injuries as they were being evacuated to Kohat CMH.

As the attacks intensified, additional contingents of security forces from other check-posts in Sherin Darra area were called in for assistance. They helped push back the militants, leaving 20 attackers dead, the official said.

The official added that it wasn’t the first time that the checkposts in the area had came under attack by militants.

The area is on the confluence of the troubled Bara and Tirah areas of Khyber Agency from where militants infiltrate into the agency, attack security forces check posts and then escape back to their hideouts in the agency.

The official added that after the attack a search operation was launched in the area and all the entry and exit routes were sealed. However, the number of suspects held couldn’t be ascertained till the filing of this report.

The official presumed that militants from the banned outfit Lashkar-e-Islam led by Mangal Bag were involved in the attack.

On Friday morning, Hawaldar Yasin, an official of Orakzai Scouts was shot by a militant sniper near the same checkpost and was killed in the attack this morning.

Whereas two days back, more than 20 including six personnel of security forces were killed in clashes at Bara region of Khyber Agency.

The security forces have been engaged in Operation Khyber-I against militants in Khyber Agency since October 17.

However, independent sources form the area revealed that the number of casualties in security forces may hike in the attack.