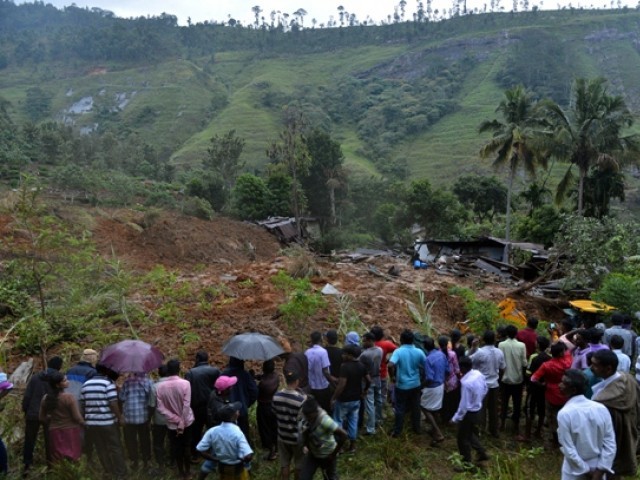 Sri Lankan residents stand near a damaged building at the site of a landslide caused by heavy monsoon rains in Koslanda village in central Sri Lanka. PHOTO: AFP

COLOMBO: A landslide in hilly south-central Sri Lanka is believed to have killed more than 100 people on Wednesday as it buried scores of houses, a government minister said, and the toll is likely to rise.

The landslide hit a village in the tea-growing area of Sri Lanka after days of heavy monsoon rain, with more than 300 people listed as missing.

“More than 100 people are believed to have died,” Disaster Management Minister Mahinda Amaraweera told Reuters from the disaster site in the village of Haldummulla, 190 inland from the capital, Colombo.

“We have suspended the rescue operations because of darkness and inclement weather. There is also a threat of further landslides.”

Children who left for school in the morning returned to find their clay and cement houses had been buried. Nearly 300 children were gathered at a nearby school as night fell amid further landslide threats.

The Disaster Management Centre said 10 bodies had been found so far, at least 300 people were missing and 150 houses buried in the village, which lies south of a popular national park.

Amaraweera said the landslide was at least 3 km long.

Villagers had been advised in 2005 and 2012 to move away because of the threat of landslides, but many did not heed the warning, he said.

“I was under the rubble and some people took me out … my mother and aunt have died,” a woman who was being treated for injuries told media.

There have been a number of landslides since the start of heavy rains in mid-September resulting in damage to roads, but there had been no casualties until Wednesday.

Some roads in the central districts of Kandy, Nuwara Eliya, and Badulla were blocked on Wednesday due to landslides, limiting public transport.

President Mahinda Rajapaksa tweeted that military heavy= machinery had been deployed to speed up search and rescue operations.

The people living in the affected hilly area are mostly of Indian Tamil origin, descendants of workers brought to Sri Lanka from South India under British rule as cheap labour to work on tea, rubber and coffee plantations.