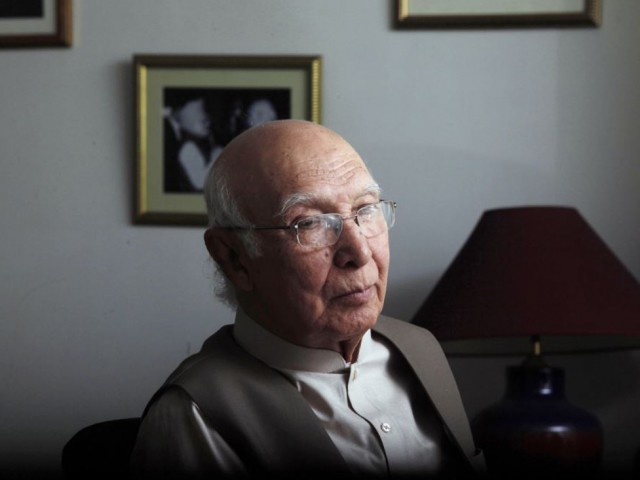 ISLAMABAD: Adviser to Prime Minister on Foreign Affairs Sartaj Aziz told a Senate panel on foreign relations on Monday that a number of reasons were contributing to the recent rise in tensions along the Line of Control and the Working Boundary with India, including incumbent Bharatiya Janata Party’s (BJP) desire to win the upcoming elections in Indian Kashmir.

“Many argue that the BJP government wants to use this escalation to win the forthcoming elections in Indian-held Kashmir,” Aziz said while briefing the Senate Standing Committee on Foreign Affairs on Monday with Senator Haji Muhammad Adeel in chair at the Parliament House.

He added that India wants to justify the cancellation of talks by arguing that it would not hold any dialogue under the shadow of bullets at the Line of Control.

The adviser reiterated the policy of advancing cordial relations with neighbours, including Iran and India.

Talking about recent border incidents with Iran, Aziz told the panel Pak-Iran border situation, he said some groups were involved in terrorist activities.

However, Aziz said that relations between both the countries were improving and steps were being taken to eliminate these terror activities.

About his visit to Afghanistan, Aziz informed that he called on President Ashraf Ghani, Chief Executive Abdullah Abdullah, national security advisor, as well as the foreign minister.

“President Ghani will visit Pakistan within a month and present a policy for the betterment of bilateral relations,” he said.

The committee meeting was attended by Leader of the House in Senate Raja Muhammad Zafarul Haq, and Senator Farhatullah Babar, among others.

Separately, in consultations between Iranian deputy foreign minister and Sartaj Aziz, Tariq Fatemi (Special Assistant to the Prime Minister) the mutual commitment to realise the full potential of the bilateral relationship was emphasised.

It was agreed that the high-level exchanges scheduled over the coming months would help advance the shared goals.

During the eighth round of Pakistan-Iran Bilateral Political Consultations led by foreign secretary Aizaz Ahmed Chaudhry and Iranian Deputy Foreign Minister Ibrahim Rahimpourthe, the entire gamut of bilateral relations, including political exchanges, trade and economic cooperation, I-P gas pipeline project, energy collaboration, and border security cooperation as part of the consultation, a statement issued by the Ministry of Foreign Affairs.

The two sides reviewed the recent border incidents and reiterated their firm resolve to maintain a tranquil Pakistan-Iran border.

It was agreed to ensure effective border controls – including through enhanced communications and coordination between the relevant focal authorities on both sides and frequent exchanges and meetings of the established mechanisms, including the Joint Border Commission (JBC).

Bleeding them dry: Ailing IDPs forced to walk miles in search of shelter