Teachers must get to know students and then learn how to teach them: Spivak

Teachers must get to know students and then learn how to teach them: Spivak 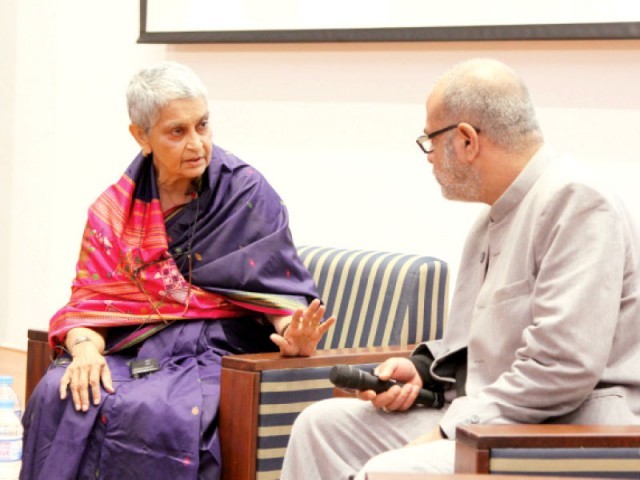 Professor Gayatri Chakrovorty Spivak is perhaps the most befitting person to be the keynote speaker in a conference on postcolonial higher education.

A leading authority on postcolonial study and feminism, Spivak has had transformative impact on the production of knowledge at highest levels, according to Habib University School of Arts, Humanities and Social Sciences acting dean Dr Nauman Naqvi. He shared these words as he called Spivak on stage to deliver her keynote speech at Habib University’s Second Annual Conference on Postcolonial Higher Education on Saturday.

Spivak, who teaches at Columbia University and is the first woman of colour to hold the title of professor at the varsity, shared the secret to her style of teaching. “The teacher must get to know his students and try to learn how to teach this group,” she said. “In my classroom, I try not only to solve problems for my students but also produce problem-solvers.”

Addressing the students in the audience, she said they must learn that democracy is not about us and ourselves, but those unlike us. “Do not let education join the Anthropocene – human activities hastening the extinction of the earth,” she said.

To a question from the audience, Spivak said teachers must not try to change the minds of their students. “You rearrange desires,” she said. “That is why it is so important to know who you’re teaching.”

Spivak felt that only a fool can think they can change anyone’s values. “We need to realise that there isn’t that kind of a distinction – enforcing a different set of values is reminiscent of apartheid,” she pointed out.

She recalled that there is only one person whose mind she has ever changed. William Sampson, who after his medical degree went to work in a factory and joined a union where he tried to tell his colleagues that their job wasn’t to struggle for job security or collective bargaining but to change exploitation all around the world, she said. “The FBI shot him and did not allow video-graphic evidence.”

And that is why she stated, “The task of a humanities teacher is to provide a non-coercive rearrangement of desire in the classroom.”

Spivak’s paper on ‘Higher Education in Our Subcontinent’ looked at problems in the education sector shared by both India and Pakistan – born out of a colonial past. “It is with the intention of slow cooking of the soul that, in the postcolonial nations, some of us propose regional humanism in higher education,” she said. “This requires a radical interrogation of the notion of contemporary post-coloniality.”

She spoke of how post colonialism had become the poster child of the colonial diasporas, the immigrants in metropolitan countries, which was a misnomer. “It has no place in the modernity of the old colonies today.”

We should refuse the interpolation of the global and adopt the complicity of our roots, she said. “Even as we collaborate with foreign metropolitan universities in order to establish an adequate ethical base to the use of science and technology, we must realise that without the careful production of subaltern intellectual, the largest sector of the electorate is left incapable of helping in the establishment of social justice.”

‘Pakistan stands in the way of a polio-free world’