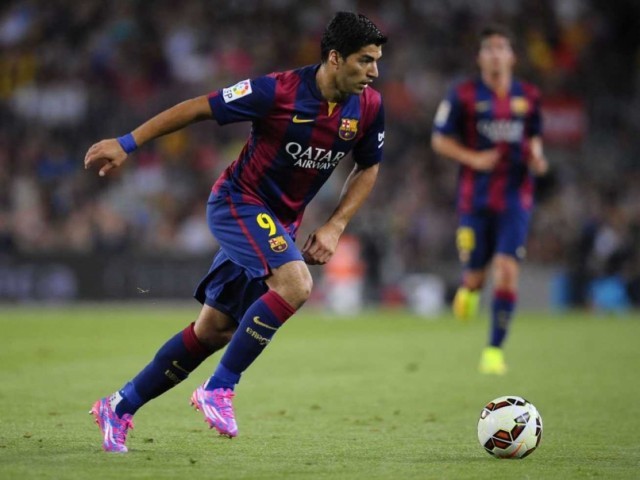 MADRID: Four months after disgracing himself in front of the world by biting an opponent for the third time, Barcelona’s record signing Luis Suarez will be back on the pitch and hoping to put his career back on track.

Suarez will finally make his competitive debut after sealing a £75 million ($127 million, 95 million euros) move from Liverpool in the biggest game in club football as the La Liga leaders travel to face Real Madrid at the Santiago Bernabeu (1600GMT kick-off).

The Uruguayan admitted to breaking down in tears in relief when he heard Barca weren’t pulling the plug on his dream move days after he sunk his teeth into the shoulder of Italian defender Giorgio Chiellini.

Now the Catalans will be hoping that months of pent-up frustration at being sidelined will be unleashed against their eternal rivals by a man who has scored in each of his league debuts with Ajax and Liverpool.

“He will have some minutes for sure,” said Barca boss Luis Enrique on Friday.

“How many I cannot say, that is the million dollar question. It is an important occasion for him to be able to join in with the group.”

Suarez’s feisty temperament will come under scrutiny in the cauldron of the Bernabeu with his latest lengthy ban just one of four in his career, three of which have been for biting.

He was also charged with racially abusing Manchester United defender Patrice Evra during his time with Liverpool.

“I think all the bad things I have been through are in the past,” Suarez told The Guardian.

“I believe I am on the right path now, dealing with the people who can help me, the right kind of people.”

However, on the field it is Madrid who have the most to lose from the 229th meeting between the two sides.

Not only could they suffer the embarrassment of seeing Lionel Messi score the one goal he needs to become the joint top goalscorer in the history of La Liga alongside Telmo Zarra on 251.

But more importantly a fifth defeat in seven league games at the Bernabeu against Barcelona would see them trail the leaders by seven points.

Early season defeats to Real Sociedad and Atletico Madrid are the root of that deficit, but Carlo Ancelotti’s men have since strung together eight consecutive wins in all competitions and the Italian believes they are ready for the ultimate test of that improvement.

“We understood well and criticised ourselves in what we did wrong against Sociedad and Atletico. With hard work we have found the balance and the team is working together,” he said.

“Now we have a test against a very competitive team.”

A game littered with star names will unfortunately be missing the match winner the last time the two sides met as Gareth Bale misses out with a muscle injury.

His place is expected to go to Isco with Madrid starting with the 4-4-2 formation that worked so well in their 3-0 win against Liverpool at Anfield in midweek.

And there is some good new for Los Blancos on the injury front as Sergio Ramos looks to have recovered from a calf strain in time to take his place in defence.