Messi and Ronald­o in form ahead of the feisty encoun­ter
By Taha Anis
Published: October 24, 2014
Tweet Email 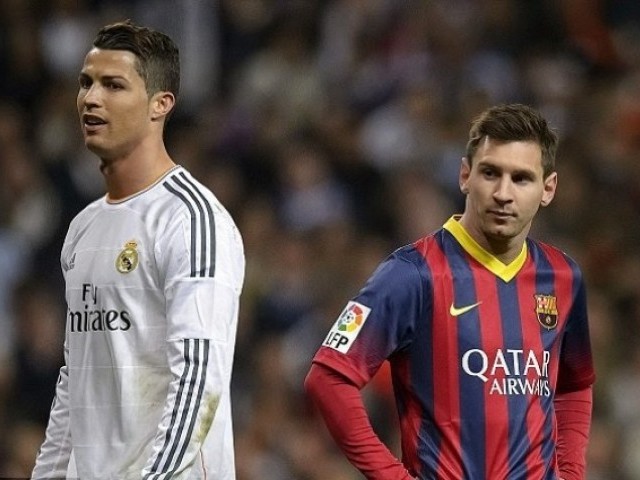 Real Madrid have scored 35 in their last eight matches while Barcelona are yet to concede a goal in La Liga, scoring 22 times in eight matches. PHOTO: AFP

KARACHI: In Barcelona, Lionel Messi received the one-two from Neymar before firing it into the bottom right corner past a helpless Xabi Irureta to make it 3-0 to the Catalonians. Nearly 350 kilometres away in Valencia, Cristiano Ronaldo skipped past several challenges before firing in his second with just as much aplomb. Eibar and Levante were the victims but the message – loud and clear as it was – was not for them, but rather for the two rivals that meet in the 228th official Clasico tomorrow; come Saturday, neither will hold no quarters.

In midweek, Ajax and Liverpool also suffered at the hands of the two phenomenons; if anything, the message became even more emphatic. Like their talismen, both teams are in top form and both mean business. The Clasico could not have arrived at a better time.

At the top of their game

Real Madrid have scored 35 in their last eight matches in all competitions since they suffered consecutive defeats to Real Sociedad and Atletico Madrid, conceding only five in the process.

Barcelona, meanwhile, are yet to concede a goal in La Liga, scoring 22 times in eight matches. However, when the Blaugrana travel to the Santiago Bernabeu, they face a team that has scored 30 in the league already.

With only one match between the two arch-rivals finishing goalless in their last 50 league encounters, way back in 2002, goals are a given, especially considering the form that Ronaldo and Messi are in.

The Portuguese has somehow managed to improve on last season’s form and has scored half of Real’s league goals so far, 15 in just seven appearances; as many as the next two on the top scorers list – Neymar (eight) and Messi (seven) – combined. He is well on his way to beat Messi’s record of 50 league goals in a season and needs only 35 more in 30 matches. Ronaldo is currently on a record run of having scored in six consecutive Clasicos and will be hoping to extend the run.

Messi, meanwhile, continues to reach one milestone after another; his strike against Eibar was his 200th goal at the Camp Nou and his 250th in La Liga, meaning he is now just one short of equalling Telmo Zarra’s record of most La Liga goals. He scored a hat-trick at the Bernabeu as Barcelona won 3-4 the last time these two teams met in the league.

The goals saw Messi become the highest goalscorer in Clasico history with 21, having previously been tied with Alfredo Di Stéfano at 18. If Messi gets on the score sheet again, he will also surpass Di Stefano as the highest scorer in the league as the two are tied on 14 at the moment.

Luis Suarez may make his debut for the Blaugrana but may not start due to his lack of match practice. If he does do so, Ancelotti must devise a plan to deal with Barcelona’s South American trio up front. However, most of his headaches must surely centre around Messi. Playing in a slightly deeper role this season under Luis Enrique, the Argentine has been pulling the strings for Barcelona and has seven assists to go with his seven goals in eight league matches.

The match, therefore, may well be decided by which team is able to control the other’s talisman better on Saturday. Easier said than done though.

Clasicos are no stranger to controversy and flared tempers so there will be little love lost when the two sides take to the field, especially considering what’s at stake; a win for Barcelona will see them open a sizeable seven-point gap over their hosts.

Enrique will also surely be targeted by the Bernabeu crowd due to his past as a player when he left Real for Barcelona in 1996. Enrique, despite being unwanted at Real, was seen as somewhat of a Judas, further earning the Madridista’s ire with his overzealous celebrations when he scored against his former side for Barcelona.

It is still unsure whether Messi will receive a tribute at the Bernabeu if he breaks Zarra’s record, with conflicting reports emerging from the Liga de Fútbol Profesional (LFP). If he does do so, it will be interesting to see how Real players and fans react, and tempers may be raised further if the LFP join in to celebrate what may be a telling goal in terms of the league’s outcome.

Barcelona with the upper hand?

With neither team having kept a clean sheet in a Clasico for 15 matches, both sides are almost a certainty to score. However, Barcelona’s superior defensive record and recent form at the Bernabeu – they have won four of the last six league matches there, losing only one – will give Enrique confidence of getting one over his former side; and the Asturian will gladly take three points even if it comes at the expense of his side’s perfect defensive record.