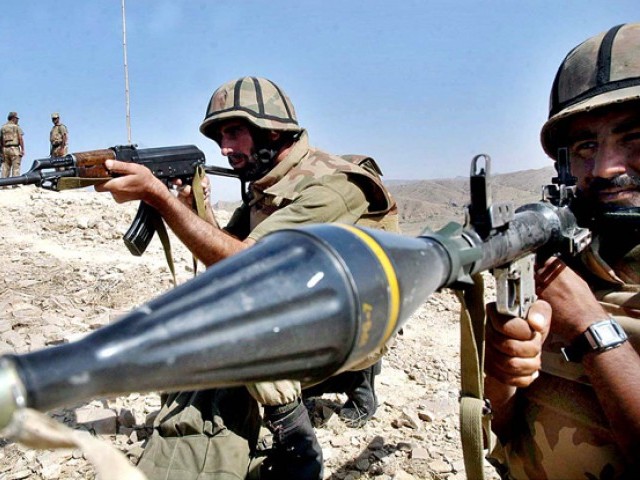 Amidst escalating displacement of civilians from Bara and Tirah Valley in the wake of Khyber-1 — the ongoing military operation against militants — clashes took place between security forces and miscreants at various places in Khyber Agency on Thursday, leaving six militants and two security personnel dead.

Tribal and official sources said that the fresh fatalities came in renewed clashes at scattered areas of Bara, adding that 10 security officials and seven militants were also injured. Besides, two civilians were also killed in Bara.

The tribesmen reaching Peshawar from Bara said that in the early hours of Thursday security forces, with the help of jet bombers and heavy artillery, targeted hideouts of militants in Sepah and Akakhel areas.

The tribesmen narrated that the latest airstrikes were severe. However, there are no details of casualties, and no official statement has been issued in this respect so far.

“During shelling several mortars landed on the civilian population areas causing injuries to at least 10 persons, including two children,” said the migrating tribesmen.

The security officials said that the dead militants included a notorious commander. Elsewhere, members of Zakhakhel Peace Lashkar set on fire houses of 10 militants in Akakhel.

The two civilians were reportedly killed when security personnel allegedly opened fire at them over violation of curfew in Alam Godar area of Bara.

Meanwhile, migration from the plains of Bara and the mountainous region of Tirah continued for the sixth consecutive day. Fata Disaster Management Authority (FDMA) Coordinator Zia Afridi told The Express Tribune that around 5,000 families, comprising more than 30,000 individuals, have abandoned their homes and reached Peshawar, Hangu and other parts of Khyber-Pakhtunkhwa. However, the official said that almost all of them have already been registered as internally displaced persons (IDPs).

On the one hand, civil administration and security forces are asking tribesmen to vacate the area and on the other hand sealing roads citing curfew as the reason. Such contrary acts on the part of the government are causing hardships to those trying to shift to safe places. Due to lack of transportation, hundreds of people can be seen walking towards Peshawar and Jamrud town of Khyber Agency.