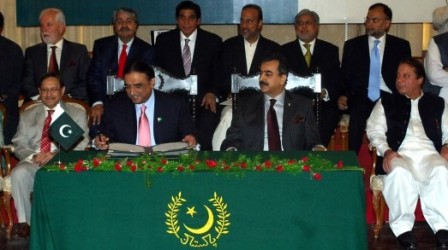 ISLAMABAD: President Asif Ali Zardari on Monday signed the landmark 18th Amendment Bill into law which strips him of key discretionary powers although he later asserted he did not believe himself powerless.

“The doors have been shut for dictatorships,” the president told the media after the signing ceremony held at the Presidency where top government functionaries and parliamentary party leaders were in attendance.

PML-N chief Nawaz Sharif, who had been skipping previous celebratory gatherings, was a conspicuous presence. Zardari told reporters that he did not believe himself powerless after signing the 18th Amendment Bill. “I draw my strength from the people of Pakistan, democracy and my party,” he said.

The president emphasised that he had neither misused his authority before nor would he do so in the future. “I am a democratic man,” he remarked, and went on to congratulate the parliament for unanimously passing the bill. He also heaped lavish praise on the parliamentary committee on constitutional reforms led by Senator Raza Rabbani for its “diligent work” and political parties who lent their support to the piece of legislation.

“The credit for the first major constitutional overhaul goes to the democratic process and the policy of national reconciliation,” Zardari said in his speech, adding that “it’s a historic day, a historic moment.” “It’s a moment of great satisfaction – indeed of pride – that the constitution has been made truly democratic and federal in character and provincial rights and parliamentary sovereignty have been restored,” the president said.

“I’m very happy that the people of Pakhtunkhwa have finally gotten their identity – an identity that eluded them for the past many decades- as their province is renamed as Khyber- Pakhtunkhwa.”

Zardari said the first major constitutional package had the backing of the parliament and political parties similar to that in 1973, during the making of Constitution. Prime Minister Yousaf Raza Gilani described the bill’s signing into law as “the beginning of a journey on the road to democracy”.

Calling the occasion a “historic event”, the premier said the 18th amendment would strengthen Pakistan, ensure supremacy of law, the constitution and the parliament. He praised President Zardari for his role in getting the amendment passed. He said that the president had shown flexibility by agreeing to the bill and that it was the first time in the history of Pakistan that power had been transferred in such a manner from the Presidency to the Parliament.

Gilani added that now was the time to tackle the serious challenges being faced by the toll than the police. “There are many groups and agencies involved in the acts of terrorism but this is the failure of government who are responsible for the protection of citizens,” he said. He demanded the government step down, conceding its failure.

The government declared three days of mourning in the province. “This is being done to express solidarity with Jamat-e-Islami over the loss of lives of their workers and officials in the bombing,” provincial information minister Mian Iftikhar Hussain told journalists. JI activists staged a protest outside the hospital, chanting slogans against the provincial government.

They did not allow the provincial health minister to enter the hospital. The blast came hours after a five-year-old boy, Taimur, was killed and at least eight other people, including seven school children, were injured in an explosion outside a school in Peshawar. The blast went off in front of the Police Public School in the afternoon at the end of the school day, District Coordination Officer Siraj Ahmed told reporters at the Khyber Teaching Hospital. He disclosed that the blast took place in a shop close to the school gate.

“It was not a security lapse as the blast took place out of the school, not inside the school,” Ahmed said, adding that security at schools in the city had been beefed up. DSP Town Haroon Babar told reporters that most of the children had left the school when the blast occurred, though some of them were still inside the building.

He said explosives were in a plastic bag and the carrier dumped them at a shop after he was unable to enter the school campus. The blast damaged two shops and a vehicle and the littered the scene with shreds of broken glass and debris. Three suicide attacks in 24 hours killed 49 people in the nearby Kohat over the weekend.