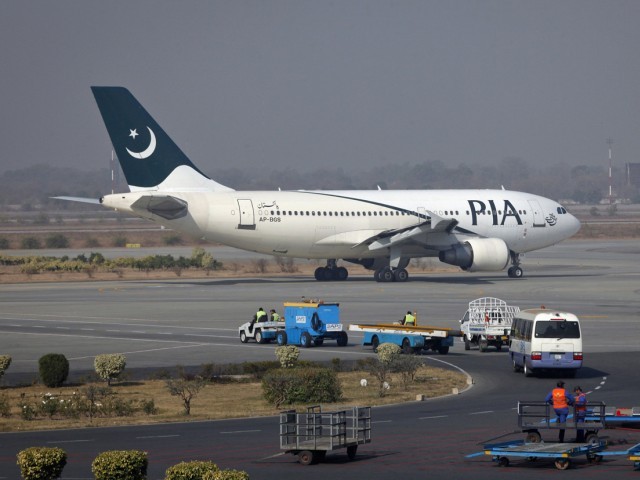 PIA told passengers of PK-319 that they would be accommodated on a flight on Wednesday morning. PHOTO: REUTERS

ISLAMABAD: As many as six passengers of a Pakistan International Airlines flight were left fuming when the airline refused to honour their confirmed tickets for a Karachi bound flight in Islamabad on Tuesday evening.

Passengers carrying tickets for PK-319 from Islamabad to Karachi had reached the Islamabad airport on time. But, as they checked-in and waited for their boarding passes, they were told by PIA officials that their tickets did not exist, before claiming that the passengers were late and would have to pay a penalty when they return for a flight on Wednesday morning.

However, the passengers, including a woman, her two children and a journalist, contended that their paper tickets were pre-confirmed and that they had arrived well in time for their 10pm flight.

On this officials withdrew the demand of the penalty, but maintained that the passengers will have to return on Wednesday morning for a flight since the current aircraft was full.

However, when the passengers protested that there was still time for the flight’s gates to close and that they should be accommodated on the same flight through their valid tickets, the authorities refused to budge, instead offered to adjust their tickets for a Wednesday morning flight – sans any penalty.

At the same time, as many as 20 passengers flying to Abu Dhabi via PIA flight PK-219 scheduled for departure at 9pm were told that their flight would depart on Wednesday evening with an alternative a flight to Dubai via Lahore on Wednesday. This prompted protests from the passengers.

Passengers said they were due to depart at 9pm but PIA first delayed the flight to 11pm but later said that the flight would depart on Wednesday evening. When the passengers protested this, PIA management said they could either take the delayed flight or they could be transferred to Lahore where they could be accommodated on a flight to Dubai on Wednesday. From there, those passengers wishing to travel to Abu Dhabi, would have to arrange their own transport.

This prompted passengers to stage a protest and forced the PIA ticket and reservations counters to be closed.