Shiny Toy Guns and Riaz Shahid films sign up with Nabila for Shaan’s next film.
By Our Correspondent
Published: October 21, 2014
Tweet Email 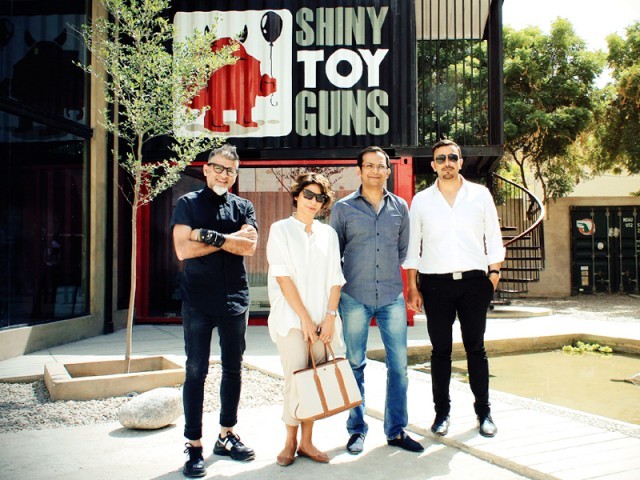 Shaan’s upcoming film Mission 5 has evoked the eagerness of his fans. But this time, it’s not just because Shaan will star in the film, but also become he will be writing its screenplay. Produced by Shaan’s Riaz Shahid Films and Shiny Toy Guns, the film will feature the cast in striking avatars, helmed by veteran stylist Nabila.

“The Pakistani film industry is going through a revival and Asadul Haq (owner of Shiny Toy Guns), being a pioneer in this industry, has facilitated this comeback,” Nabila tells The Express Tribune. “We at Nabilas are proud to be closely associated with it and hope to make it grow stronger,” she adds.

Nabila will be giving “extreme makeovers” to the cast next month, something that she hasn’t done before for a film. The looks of the film will be revealed just before it hits the floor. “Someone once told me, if you want to do something different, ask your close friends first. They have known you all your life, so they can help you with your fears and dreams without batting an eyelash,” says Haq. Adding, “Having Nabila on my first feature is part of the same scenario. I have known her all my life and always looked up to her for her aesthetics and style sense.”

Tentatively titled Mission 5, the film is an action thriller intertwined with a love story and is said to have a production budget much higher than any Pakistani film released to date. Bafta-winning Director of Photography Nicholas D Knowland of Jinnah fame will lend his services for the project. And Hollywood actor Farhan Tahir, who starred in Iron Man and Star Trek, will feature as the main antagonist in the film.

As a production house, Shiny Toy Guns aims at being fully integrated, providing something for those who wish to be a part of the entertainment industry. Haq earlier shared the multitude of ways in which aspirants can seek assistance from the company. “It’s not about just directing. It’s about helping you finance, produce, post and, hopefully, distribute your project if needed,” he comments. “My ultimate aim is to take this forward in a way that it helps in exposing individuals to the productive side of the business.”