The two teams have had contra­sting fortun­es so far this season
By Agencies
Published: October 21, 2014
Tweet Email 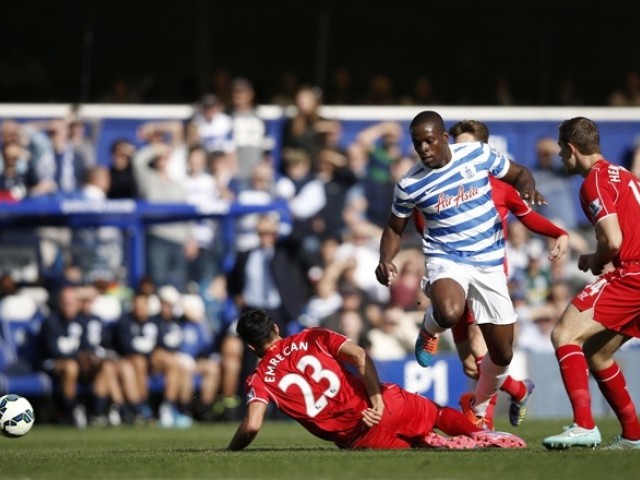 STRUGGLING FORM: The Reds have been well below their best much of the season and being outplayed for long periods on Sunday by QPR, the Premier League's bottom club, has further caused reasons to worry. PHOTO: AFP

LIVERPOOL: Brendan Rodgers has challenged his Liverpool players to rise to the occasion when they face holders Real Madrid in a crucial Champions League showdown at Anfield on Wednesday.

Rodgers’ side can’t afford to lose any more ground in the race to qualify for the knockout stages after a shock loss against Basel in their previous Group B match.

The Reds have been well below their best much of the season and there were more worrying signs for Rodgers on Sunday when QPR, the Premier League’s bottom club, out-played Liverpool for long periods of a chaotic encounter.

Liverpool eventually won 3-2 despite twice squandering the lead in the final minutes.

Given Liverpool’s defenders had huge trouble with QPR’s willing but limited strike partnership of Bobby Zamora and Charlie Austin, it would be no surprise if Rodgers had suffered a few sleepless nights contemplating how his creaky defence will deal with Real’s breathtaking array of attacking talent.

Even though Wales winger Gareth Bale is sidelined by a buttock muscle injury and Sergio Ramos is out due to a calf problem, Real boss Carlo Ancelotti has Cristiano Ronaldo in arguably the best form of his majestic career, while the likes of Karim Benzema, James Rodriguez, Toni Kroos and Luka Modric comprise a formidable support act for the spotlight-hogging Portugal star.

And Rodgers hopes the crucial nature of the tie, combined with the Anfield atmosphere, will lift his team out of their current malaise.

“Whenever you play in the big games the great competitors come out and I have no doubt with my players as their mentality is very strong,” said Rodgers.

“Anfield is a special place for a Champions League football game and we are really looking forward to it.”

In contrast to Liverpool’s lethargic performances of late, Real arrive on Merseyside in imperious form.

Ancelotti’s side has won its last seven matches in all competitions, scoring 32 goals in the process after routing Levante 5-0 on Saturday.

“I think we are arriving well into this week,” said Ancelotti. “We have time to recover and then think about the game on Wednesday [today].”

If Anderlecht are to have any realistic chance of prolonging their involvement in the Champions League beyond the group stage, a home win over Arsenal today is paramount.

The Belgium side is joint bottom of Group D with one point from their opening two games, two points behind Arsenal and five behind leaders Borussia Dortmund.

Arsenal are not firing on all cylinders, however, and Saturday’s 2-2 home draw with Hull City left Arsene Wenger’s side 11 points off the pace in the Premier League.

The London club are still formidable opponents, but if ever there was a good time to face the Gunners it might be when they are stretched with record signing Mesut Ozil, Olivier Giroud and Mathieu Debuchy injured and first-choice keeper Wojciech Szczesny suspended after his red card against Galatasaray.

Dortmund out to brush off horror form

Dortmund coach Jurgen Klopp described his side’s 3-0 win at Anderlecht earlier this month as ‘perfect’, but things are far from rosy now for Borussia after three straight Bundesliga defeats.