People from across Sindh waited for Bilawa­l just like they had for his mother and grandf­ather.
By Tooba Masood
Published: October 19, 2014
Tweet Email 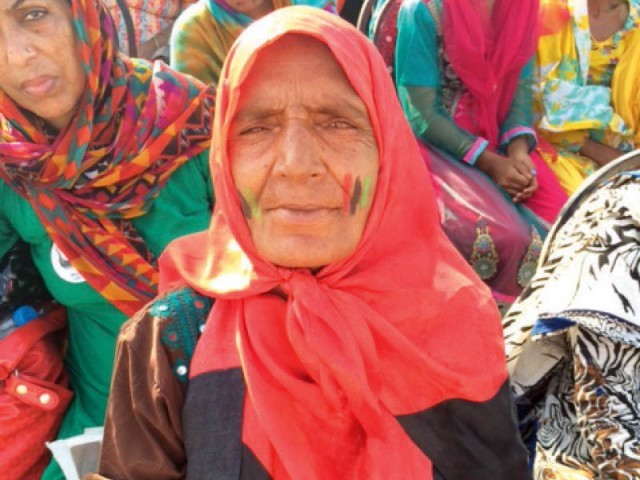 Inayat Khatoon came to Karachi with one thing in mind. All she wants to do is hold Bilawal Bhutto Zardari in her arms and tell him that she will be there for him the same way she was there for his mother and his grandfather before him.

With a Pakistan Peoples Party flag wrapped around her head, Inayat said that it felt nice to see brave young men as the party chairperson taking lead. “He reminds me of his grandfather so much,” said the resident of Larkana. “I have been to all of the party’s rallies in Sindh from the time of Zulfikar Ali Bhutto. I was also there seven years ago when the twin blasts happened at Karsaz.”

She added that she could not miss Bilawal’s first jalsa at all. “He is like our son. We need to be here for him to show him that we care. He is the son of Sindh.”

Inayat did not seem to mind waiting for the young leader to come up on stage. “We have been here since 11am,” she said. “Waiting a few more hours to see him won’t do any harm to us.” If she ever gets to meet Bilawal in person, Inayat said, she will tell him that they are there for him.

Sitting next to Inayat was Ghulam Zohra, who is also from Larkana, “I am glad I could come here to see him,” said Zohra. “All of us took the bus the day before and wanted to be here in time to see Bilawal on stage. Even if the party doesn’t do anything for us, it is enough to know that there is someone there.”

Ma Bibi says she has been supporting the PPP since she was in her mother’s womb. “My father was a big supporter of Zulfikar Ali Bhutto and all of us grew up loving him and his children,” she said. “We are hoping to see Bilawal here today. I saw his mother when she was very young and unmarried. It is amazing to see Bilawal all grown up.”

Shama, a resident of Orangi Town, said there was no question of not attending the October 18 jalsa. “Benazir helped me get a job when I needed it most,” she said. “How could I miss her son’s jalsa? I am thankful to her for helping me out. It is a debt I can never repay.”

Rani was very emotional at the rally. She said that her love for the party and the Bhutto family could not be measured. “We have always supported them and will continue to do so till the moment we die,” she said. Hina, 25, was rushing to get a good seat. “I have come here with people from my office,” she said. “We are here to support Bilawal as he represents the youth.”

Decked in ajrak from head to toe, Qirtas, a university student from Karachi, said there was no way she was going to miss the rally. “I was very upset when I missed the Sindh Festival,” she said. “I will stay here till Bilawal speaks.”