Bilawa­l Bhutto has the capaci­ty and the vision to lead the nation, partic­ularly the younge­r genera­tion
By Sharjeel Inam Memon
Published: October 18, 2014
Tweet Email 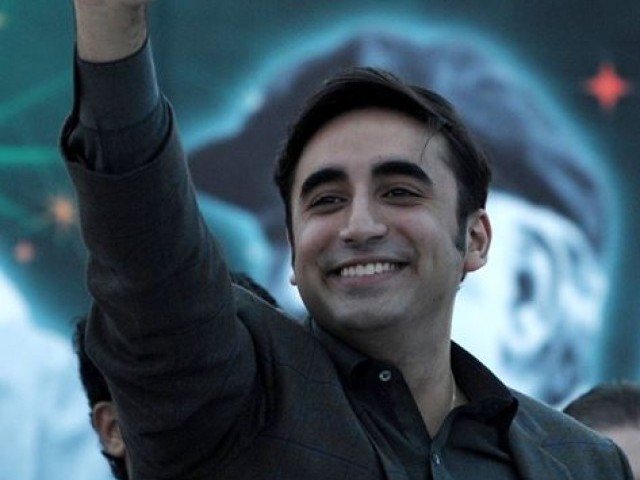 Bilawal Bhutto has the capacity and the vision to lead the nation, particularly the younger generation. PHOTO: AFP

Pakistan is under a relentless onslaught and vigorous assault from religious extremism. This religious fundamentalism has penetrated into every institution of the country. The worst affected of these is politics in the country.

The majority of Pakistan’s political parties, either because of ideology or out of fear, have surrendered, falling under the influence of religious extremism. Thinking it better to yield rather than stand up for a moderate Pakistan, these parties have developed direct and indirect working relationships with orthodox and extremist religious outfits to find their way into the corridors of power.

This trend was further strengthened in the last general election when obscurantist religious elements eroding the writ of the state terrorised and ousted all secular forces from the election arena through acts of violence and sabotage in which countless political workers and political leaders voicing moderation lost their lives.

In this suffocating political atmosphere, the minorities are finding it impossible to survive; moderates and enlightened people have started losing hope of living with dignity and peace in the dream that was the Quaid-e-Azam’s Pakistan.

What is all the more surprising is that all those political forces who have come onto the streets and protested vociferously against rigging in the election are none other than those who greatly benefitted from religious extremism and are the byproduct of religious-fanatic sentiments.

Their indignation is actually a covert protest against their ‘masters and mentors’, criticising them for failing to get the required majority so that they could rule the country. In other words, the on-going fight is actually between two factions of the same school of thought, both of which are protected and promoted by religious extremism. Therefore, whoever wins or loses in this contest, the ultimate losers will still be the moderates.

Moderation and liberal values are a virtue and instinct that PPP Chairman Bilawal Bhutto Zardari has inherited from his grandfather Zulfikar Ali Bhutto and mother Benazir Bhutto. Both leaders believed in humanity and co-existence. Their commitment to the people of Pakistan was above all such prejudices. Bilawal Bhutto being highly educated and trained by Benazir Bhutto and Asif Ali Zardari has the capacity to steer the country out of fundamentalism and to lead it according to the vision and injunction of Quaid-i-Azam Mohammad Ali Jinnah.

Pakistan is beset with ceaseless internal challenges like poverty, illiteracy, energy shortage, unemployment, crimes against women and so on. However, the most pervasive challenge is to free society from the malevolent religiosity nurtured under the dictatorship of General Ziaul Haq and his protégés.

This extremism has poisoned the new generation and given further fillip to the clandestine internal and external support being given to the remnants of General Zia, whether they are sitting in the corridors of power or out protesting on the streets of Islamabad.

This nexus will do nothing but further destroy the young generation by extending support to them in the name of laptops or `reforms’ or `Naya Pakistan’. The nation needs the Pakistan that the Quaid-i-Azam founded in 1947 and which was strengthened by Zulfikar Ali Bhutto by giving it a consensus constitution in 1973 and the democratic Pakistan which Mohtarma Shaheed Benazir Bhutto founded on the basis of reconciliation and also laid down her life for the sake of democracy.

Bilawal Bhutto has the capacity and the vision to lead the nation, particularly the younger generation, to make a modern and moderate Pakistan. The Pakistan of Mr Jinnah in which all religious minorities would enjoy equal rights. The Pakistan of Zulfikar Ali Bhutto, in which rapid and massive industrialisation would boost the crippled economy. The Pakistan of Mohtarma Benazir in which women’s empowerment would enhance their role in nation building.

The Pakistan of Bilawal Bhutto would be purged of religious bigotry and fanaticism. The nation, particularly the younger generation which constitutes 60 per cent of the population, cannot be misguided by mere slogans. They know the sanctimonious protesting forces in collaboration with extremists have a clandestine agenda to impose their autocratic extremist views in the country. Their agenda is destined to destroy the system and mentally paralyse and enslave the young generation. This is a part of international conspiracy which they want to implement.

The appearance of Bilawal Bhutto Zardari is a clarion call against the extremist forces. The moderate citizens of Pakistan need to strengthen Bilawal to cleanse society of the bigots who want to destroy this beautiful country with their orthodoxy.

Today, Bilawal will follow in the footsteps of Shaheed Zulfikar Ali Bhutto and Shaheed Mohtarma Benazir Bhutto and make history by addressing the largest public meeting ever held in the political history of Pakistan.

The PPP believes in the peoples’ power and Bilawal wants to reaffirm this pledge and strengthen his bond with the people of Pakistan. This rally is not simply a show of political strength but a commitment to the selfless service to Pakistan, its people. It is also a commitment with the father of the nation to restore and reclaim his Pakistan, the one that he had founded in 1947.

The writer is Provincial Minister for Information, Government of Sindh