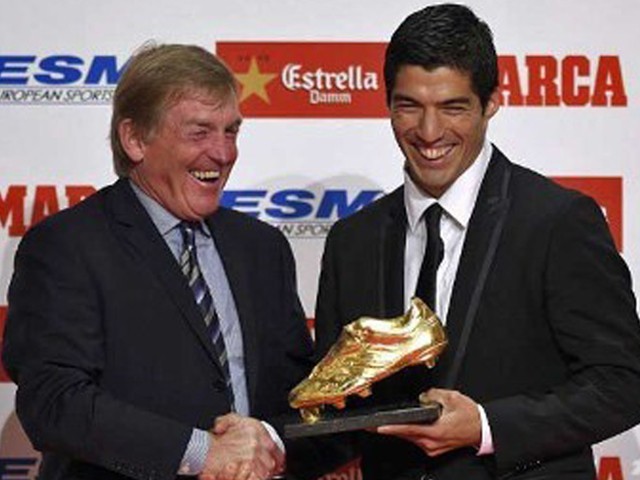 OLD TIES: Former Liverpool player Luis Suarez is all smiles as he receives the golden boot from the man who signed him for The Reds in 2011. Photo: AFP

BARCELONA: Former Liverpool striker Luis Suarez received the Golden Boot award on Wednesday as Europe’s top scorer last season from Kenny Dalglish, who signed him for The Reds in 2011.

The Uruguayan scored 31 times to help Liverpool to a second-place finish in the Premier League last season.

The 27-year-old, now at Barcelona, shared the award with Real Madrid’s Cristiano Ronaldo, who ended last year’s campaign with the same tally in the league.

Suarez, who is due to end his four-month World Cup biting ban when Barcelona line up against Ronaldo’s Real next Saturday, said: “I want to thank all of the most important people in my life; my wife and my children, and of course everyone at Liverpool — all my colleagues, not just last year but over the whole three-and-a-half years I was at the club. They were spectacular years and it was thanks to this man here [Dalglish] that they signed me, that they noticed me. Now I am moving onto a new period, and I have to enjoy this next stage of my life — it is a dream come true.”

Suarez, who featured in the two friendlies for Uruguay during the international break, feels he is ready to take part in the classico.  “If you had asked me that [whether he is ready] a week ago, before the two games with Uruguay, I may have had my doubts,” he said. “But I have played in those two games and I am probably in better condition than I thought I was. So I think I can say now, yes, 100 per cent, I am ready to play.”

Dalglish, his former boss at Anfield, believes that Suarez will be an instant hit at the Nou Camp and joked that Liverpool will be happy to take him back if he is no longer wanted in Barcelona. “I don’t think there will be anybody who will be able to stop him,” said the former Liverpool manager. “He has been fantastic everywhere he has been – a huge success and fabulously entertaining. There is no reason why he won’t continue that for Barcelona. But if he does hit a problem, I’m sure we can take him back on loan.”