HRCP Baloch­istan presid­ent says actual number of migran­ts may be higher but only these could be authen­ticate­d
By AFP
Published: October 15, 2014
Tweet Email 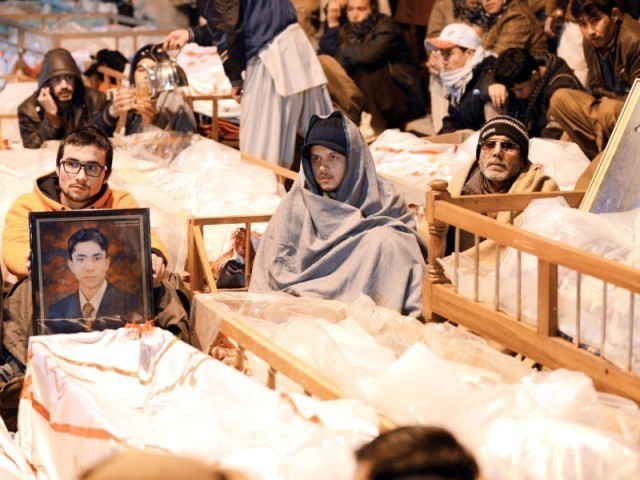 QUETTA: More than 300,000 people including Shias and Hindus have fled Balochistan over the past 10 years due to growing unrest, a rights group said Wednesday.

Tahir Hussain Khan, president of the Baluchistan chapter of the independent Human Rights Commission of Pakistan, said: “The figure of 300,000 is a considerable figure. The actual number of migrants may be higher but we could only authenticate this.”

Khan said the Hazaras were worst hit by the unrest, with as many as 200,000 of them relocating to Pakistan’s major cities or abroad.

At least 24 Hazara pilgrims were killed in June when their bus was targeted by suicide bombers. Further, two devastating bombings in Quetta targeting Shias killed nearly 200 people last year and were claimed by Lashkar-e-Jhangvi.

Around 10,000 Hindus have migrated from several areas of Balochistan after incidents of extortion, kidnapping for ransom and killings, Khan added.

He said the Hindus have settled in Karachi, adding that his commission has received three complaints of forced religious conversions.

The rest of the migrants included around 300 Parsi families and 400 members of the Zikri sect.

Khan said the other 90,000 people who have fled are from the Punjabi and Urdu-speaking communities, who have left to avoid violence by Baloch nationalists.

Akbar Hussain Durrani, the provincial home secretary, accepted that the various groups had left but said the total was exaggerated.

“I dispute the figure of 300,000, I don’t know where they have gathered these figure. Yes I accept that there was migration of these groups, but not at such a huge level that HRCP (Human Rights Commission of Pakistan) claims,” he said.

Measles on the rise in Balochistan: Nine children admitted in hospital