Unemployment doubles in a space of a year: study

Unemployment doubles in a space of a year: study

Jobles­sness is increa­sing and an unskil­led person is as likely to lose a job as a highly-educat­ed and skille­d worker.
By Qaiser Butt
Published: November 15, 2010
Tweet Email 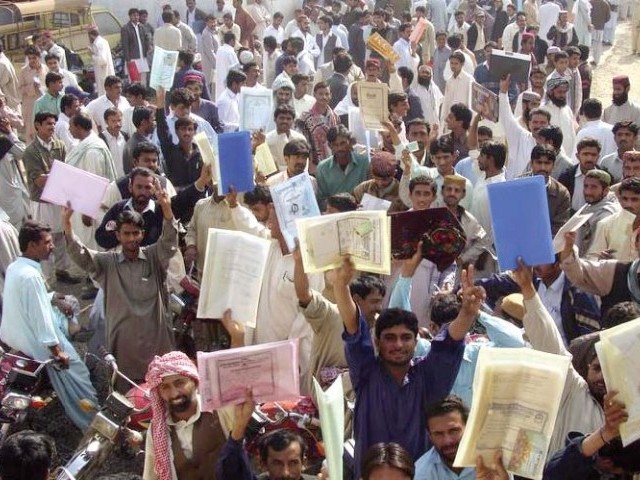 ISLAMABAD: The findings of two separate reports – one compiled by the US Central Intelligence Agency (CIA) and another by Islamabad-based Pakistan Public Administration (PBA) – concur that joblessness is increasing by leaps and bounds and an unskilled person is as likely to lose a job as a highly-educated and skilled worker.

According to CIA’s findings, the unemployment rate in Pakistan has doubled during the current year against the past year’s figures.

CIA’s World Fact Book, which is available on the web, says that the unemployment rate jumped from 7.4 per cent in 2009 to 15.2 per cent this year.

Incidence of unemployment among highly-educated and skilled people is on the rise and government policies to provide jobs to people have been discouraging. Official data collected between 2006 and 2009 showed that the total number of civil servants in federal government’s services was 240,558 against 234,933 in the period between 2003 and 2006, reflecting an increase of just four per cent, with only 9,625 people provided with jobs.

The official report, released in August 2010, shows the increase of women female civil servants was only 10.78 per cent.

The total sanctioned strength for all categories of federal government employees was 419,499 during 2006 – 2007, while the actual strength was 375,932 in July 2006. No official department knows the actual number of unemployed persons across the country, because the national census survey has not been carried out over the past 12 years because of various security and political reasons.

If we accept the authenticity of statistics compiled by several federal government departments, which cite the rate of employment to be more than 12 per cent, then the total number of unemployed people across the country comes to around four million and this number is steadily increasing.

Top industrialists attribute the escalation in joblessness to different factors, including gas and electricity shortages that have resulted in the closure of thousands of industrial units over the past two to three years.

Another factor is the law and order situation, particularly in Khyber-Pakhtunkhwa (K-P) and Sindh. They say that the incidents of kidnapping for ransom in K-P and targeted killings in Karachi were responsible for capital flight and closure of industrial units. With the national economy in such an alarming state, people’s dependence on government jobs is also on the rise.

“The government cannot provide jobs to each and every individual,” said federal Minister for Railways Haji Ghulam Ahmed Bilour, who ordered the closure of over 100 train services during the past four months. He has also been asking the federal cabinet for the privatisation of the state-run railways.

“In addition, Pakistani rupee has depreciated considerably since 2007 as a result of political and economic instability.

“Textiles account for most of Pakistan’s export earnings, but Pakistan’s failure to expand a viable export base for other manufactures have left the country vulnerable to shifts in world demand. Other long-term challenges include expanding investment in education, healthcare, and electricity production, and reducing dependence on foreign donors,” the report said.