The infect­ed health worker had close and freque­nt contac­t during the 11-day treatm­ent of Thomas Eric Duncan­
By Reuters
Published: October 13, 2014
Tweet Email 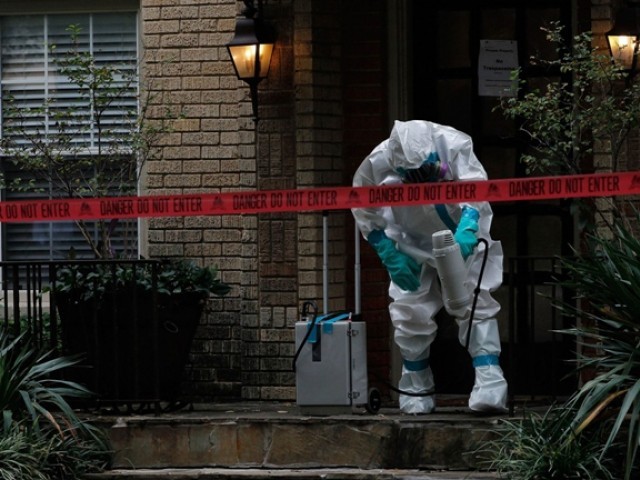 A man dressed in protective hazmat clothing treats the front porch of an apartment where a second person diagnosed with the Ebola virus resides on October 12, 2014 in Dallas, Texas. PHOTO: AFP

DALLAS: A Texas health worker has contracted Ebola after treating a Liberian who died of the disease at a Dallas hospital last week, raising concern about how US medical guidelines aimed at stopping the spread of the disease were breached.

Texas Health Presbyterian Hospital in Dallas, where the new case was announced on Sunday, has already faced criticism for its management of the infection.

The infected worker, a woman who was not named, is the first person to contract the disease in the United States. She had close and frequent contact during the 11-day treatment of Thomas Eric Duncan, who died on Wednesday, health officials said.

The current Ebola outbreak is the worst outbreak on record and has killed more than 4,000 people, mostly in West Africa’s Liberia, Sierra Leone and Guinea.

Duncan, a Liberian, was exposed to Ebola in his home country and developed the disease while visiting the United States.

The new case in Texas indicated a professional lapse that may have caused other health workers at the hospital to be infected as well, said the director of the Centers for Disease Control and Prevention (CDC).

“We don’t know what occurred in the care of the index patient, the original patient, in Dallas, but at some point there was a breach in protocol, and that breach in protocol resulted in this infection,” CDC director Dr Thomas Frieden told a news conference.

Hospital officials said the worker had been wearing CDC-recommended protective gear during treatment, including gowns, gloves, masks and shields.

“We are evaluating other potential healthcare worker exposures because if this individual was exposed, which they were, it is possible that other individuals were exposed,”  Frieden said.

Tests by the CDC confirmed the patient had been infected with Ebola.

“Unfortunately it is possible in the coming days that we will see additional cases of Ebola,” he said. Frieden said there was one person who may have had contact with the infected health worker when she could transmit the disease and that person is being monitored.

The infected worker was not among the 48 being monitored.

The Dallas hospital failed to recognise that Duncan had the symptoms of Ebola when he first went to the emergency room.

He was sent home, allowing him to potentially expose others to the virus. Even though he was admitted two days later, his family has called for an examination of his care.

US President Barack Obama ordered federal authorities to take additional steps to ensure the American medical system is prepared to follow correct protocols in dealing with Ebola, the White House said in a statement Sunday.

In an effort to stop the spread of the disease, New York’s John F Kennedy Airport on Saturday began the screening of travelers from the three hardest hit West African countries.

The airport is the first of five US airports to start enhanced screening of US-bound travelers from Guinea, Liberia and Sierra Leone.

In Liberia, thousands of Liberian healthcare workers are set to begin an indefinite strike at midnight on Monday which could undermine the country’s effort to stop the spread of the virus and leave several hundred patients without care.

In a sign of the growing worries of more infections outside of Africa, a medical clinic near Boston was evacuated and a patient has been isolated because of his recent travel to West Africa and medical symptoms, the Boston Globe reported on Sunday.

The Ebola virus causes hemorrhagic fever and is spread through direct contact with body fluids from an infected person, who suffers severe bouts of vomiting and diarrhea.

The Texas case is not the first outside West Africa in which a health worker contracted the disease after contact with a patient.

In Spain, a nurse who contracted Ebola after caring for two infected priests repatriated to Spain remained seriously ill but showed signs of improvement.

Teresa Romero, 44, is so far the only person who has tested positive for Ebola through a transmission in the country.

In Dallas, there was a yellow hazardous material drum on the lawn of the brick apartment where the Texas health worker lived and information pamphlets about the Ebola virus were stuffed in the doors in the surrounding blocks of the apartment.

Neighbour Cliff Lawson, 57, said he was woken at 6 am by two Dallas police officers who told him “don’t panic.”

“I went back to bed after that. There’s nothing you can do about it. You can’t wrap your house in bubble wrap,” Lawson said.

A team was decontaminating the patient’s apartment and car. The infected worker, who was taking her temperature twice a day as a precaution, informed the hospital of a fever and was isolated immediately upon arrival there, the hospital said.

A union for registered nurses said her case in Dallas showed that not enough is being done to educate health workers on how to manage patients who show signs of infection.

“Handing out a piece of paper with a link to the Centers for Disease Control, or telling nurses just to look at the CDC website – as we have heard some hospitals are doing – is not preparedness,” said Bonnie Castillo, a registered nurse and senior official with National Nurses United.