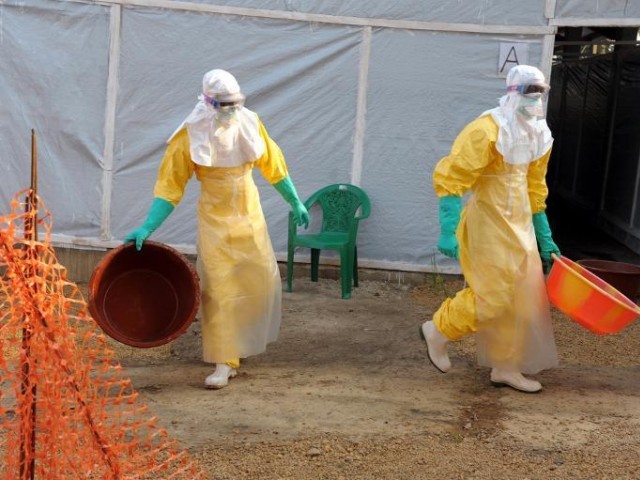 A file photo of doctors in protective gear. PHOTO: AFP

MADRID: The death toll from Ebola has passed 4,000, the World Health Organization warned, as authorities worldwide tried to prevent panic over the deadly disease and a Spanish nurse fought for her life in hospital.

The WHO said 4,033 people have died from Ebola as of October 8 out of a total of 8,399 registered cases in seven countries. The sharp rise in deaths came as the UN said aid pledges to fight the outbreak have fallen well short of the $1 billion (800 million euros) needed.

Spanish government officials were due to meet on Saturday morning for a gathering of their new crisis committee to tackle the crisis after a Madrid nurse became the first person to get infected with the haemorrhagic fever outside of Africa.

They have called for calm and vowed to boost health safety protocol and investigate what failings led to the nurse, Teresa Romero, getting infected.

Almost all the deaths have occurred in west Africa, but after Romero’s death fears spread beyond that region about the world’s worst-ever Ebola epidemic.

The Canadian government advised its citizens on Friday to leave the west African countries hardest hit by Ebola, while taking measures at its own borders to screen for potentially exposed travelers.

The US and Britain also boosted screening at major airports.

The US Centers for Disease Control and Prevention predicted the number of cases could reach 1.4 million by January unless strong measures are taken to contain the disease.

From Australia to Zimbabwe, and Brazil to Spain, people who showed signs of fever or had recent contact with Ebola victims were whisked into isolation units or ordered to stay in their homes.

Authorities warned that hoaxes could trigger panic as a man was taken off a US flight by a bio-hazard team after he sneezed and reportedly said: “I have Ebola. You are all screwed.”

Serious concerns remained in Spain over how the virus could have spread in a top specialist disease hospital.

Healthcare workers told AFP the quarantine floor of Carlos III hospital in Madrid, where 44-year-old Romero was infected, was shut last year as a result of spending cuts and only re-opened for the two missionaries flown back from Africa with the disease in August.

Prime Minister Mariano Rajoy visited the hospital, where Romero, who caught Ebola while caring for the missionaries, was said to be in a “stable but serious” condition.

Doctors there took in three more patients for observation Friday bringing to 17 the number under surveillance, including Romero, her husband and other medical staff.

The United Nations and leaders of the Ebola-stricken nations of Guinea, Liberia and Sierra Leone pleaded for greater help for the frontline of the disease in Africa.

The president of Guinea, one of the West African nations hard-hit by the Ebola crisis, met Friday with IMF Director Christine Lagarde, who promised the organization was “ready to do more if needed” to fight the disease.

UN Deputy Secretary General Jan Eliasson said only a quarter of “the one billion dollars sought” to combat the disease had been pledged.

He appealed for doctors, nurses and other healthcare personnel to come forward.

His comments echoed a plea on Thursday from UN Secretary General Ban Ki-moon, who said resources to support the fight must be increased 20-fold.

“We have to work now so that it is not the world’s next AIDS,” CDC Director Tom Frieden warned the heads of the United Nations, World Bank and International Monetary Fund gathered in Washington Thursday.

In Liberia, where the official death toll was put at 2,316 by the WHO on Friday, the government said it had banned journalists from Ebola clinics, arguing it was to protect patients’ privacy.

The move came as nurses at the largest government Ebola clinic in the capital Monrovia staged a “go slow” to demand hazard pay, defying a request by UN health officials to avoid industrial action during the crisis.

In France, a public building was briefly evacuated in a Paris suburb on Thursday when an African man felt ill. Earlier, the arrival of a group of schoolchildren from Guinea had sparked panic at a French school. Ebola was ruled out in both cases.

Macedonia quarantined people who had come into contact with a Briton who died on Thursday after exhibiting Ebola-like symptoms.

Brazilian health officials Friday quarantined a Guinean man feared to have Ebola, but stressed it was a precautionary measure and the man no longer had a fever or other symptoms.

The Moroccan government called for the 2015 Africa Cup of Nations to be postponed due to the epidemic.