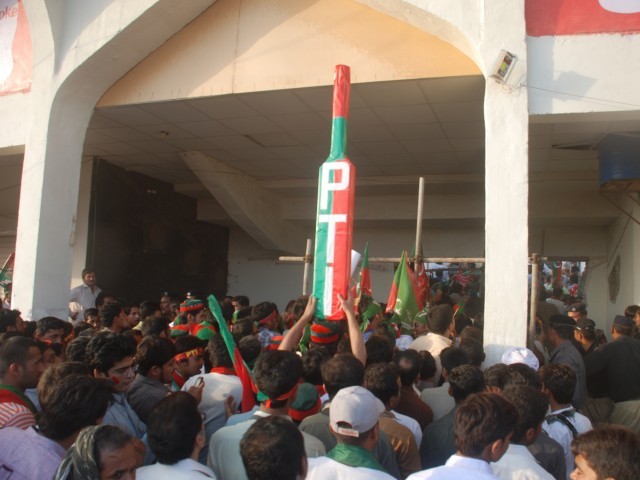 ISLAMABAD / MULTAN: Leadership of Pakistan Tehreek-e-Insaf (PTI) traded blame with district government Multan after eight people were killed and over 100 others were injured as a result of a stampede in the party’s rally in Multan on Friday.

“Shah Mehmood told me that DCO Multan, Zahid Saleem Gondal did not cooperate with the party while organising the rally,” Imran said.

Imran alleged that only two gates of the venue were opened at the end of the rally and the lights were also switched off. “Why did they not open the rest of the gates after the event had ended.”

He asked the Punjab chief minister to initiate an inquiry, and punish those who were involved in disorganisation.

“I urge Shahbaz Sharif to conduct inquiry and immediately suspend the DCO,” he said.

“The Multan and Punjab administration are responsible, as there was no mismanagement from our side,” he claimed.

Gondal added that the power supply of the ground was not cut, and the area was exempted from load shedding.

In a press conference, he said blame game was not reasonable, adding that all points were agreed upon in a meeting with PTI Multan president Ijaz Hussain Janjua.

Quoting the undertaking given by PTI Multan president, Gondal said the permission to organise a rally was granted after organisers agreed to abide by the agreement’s conditions.

He said the PTI agreed to arrange lights on the backside of the stage and to affix a barbed wire to restrict public from entering in the 23-feet radial gap from the stage.

“Proper lights arrangement will be made in the pandal, and along the sidewall,” reads the agreement, he said. “PTI officials told us that they use generators in their rallies, which were used in the Multan rally as well.”

The DCO added although the ground had no power supply connection, the local administration installed a connection a day prior to their rally.

Gondal said chief minister Punjab has already ordered an inquiry, after which everything will be clarified.

Meanwhile, Pakistan Muslim League-Nawaz leader Rana Sanaullah blamed PTI leadership for the mishap, as he claimed that it was the responsibility of the party holding a rally to make the arrangements.

“They are just playing blame game and want to do politics over dead bodies of innocent men and women,” he alleged. “It was their responsibility. The party holding a rally is responsible for making arrangements.”

He said the Punjab government will register a case and investigation will be carried out as per law.

Qasim Bagh has six gates, but only three of them were operational due to security reasons. Gate one was open for everyone, gate two was open for families and the third was reserved for the entry and exit of PTI’s leadership.

When lighting failed, two gates were closed and only one was left open for the people to exit. Since crowds were massive, they moved towards the two gates resulting in the the mishap.

Out of the 115 injured, 41 are said to be critically injured.

Lounges are the new drawing rooms