Satyar­thi has been at the forefr­ont of the drive agains­t child labour in India
By AFP
Published: October 10, 2014
Tweet Email 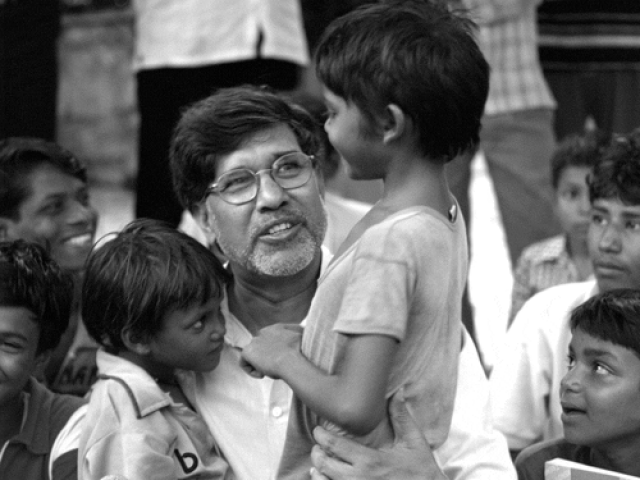 NEW DELHI: Kailash Satyarthi, named co-winner of the Nobel Peace Prize on Friday, has freed tens of thousands of Indian children forced into slavery by businessmen, land-owners and others.

Born on January 11, 1954, Satyarthi has been at the forefront of the drive against child labour in India where the practice is rife.

Satyarthi, who was trained as an electrical engineer, founded the Bachpan Bachao Andolan or Save the Childhood Movement in 1980.

He lives modestly and keeps a low profile except for his causes.

The activist, born in the central Indian state of Madhya Pradesh, said he was “delighted” by the Nobel award, according to the Press Trust of India, and described it as “recognition” for the fight for child rights.

He began his work by staging raids on Indian manufacturing, rug-making and other plants where children and their parents often work as bonded labour.

Under bonded labour, families often borrow money and have to work till the funds can be repaid. But often the money is too much to be paid back from meagre earnings and people are sold and resold.

Building on his initial activism, Satyarthi organised the Global March Against Child Labor in the 1990s, dedicated to freeing the millions of children abused worldwide in a form of modern slavery.

He and co-winner Malala Yousafzai  were honoured by the Norwegian Nobel Committee “for their struggle against the suppression of children and young people and for the right of all children to education”.

“To employ children is illegal and unethical,” Satyarthi said on the Global March Against Child Labour website.

“If not now, then when? If not you, then who? If we are able to answer these fundamental questions, then perhaps we can wipe away the blot of human slavery,” Satyarthi said, summing up his philosophy.

The activist is also founder of RugMark, a widely known international scheme that tags all carpets made in factories that are child-labour free.

He described the plight of children forced into the worst kinds of abusive work in a 2010 interview with the Robert F Kennedy Centre for Justice and Human Rights.

“If they cry for their parents, they are beaten severely, sometimes hanged upside down from trees and even branded or burned with cigarettes,” he said.

He also spearheads the South Asian Coalition on Child Servitude or SAACS, among other groups, and helps oversee a transition centre in Rajasthan where newly freed labourers learn fresh skills.

Satyarthi has said his social conscience was awoken when he was six and noticed a boy his age on the steps outside the school with his father, cleaning shoes.

Seeing many such children working instead of being educated, he felt an urge as he grew older to solve the problem , launching him on his career of activism.

“I think of it all as a test. This is a moral examination that one has to pass. … to stand up against such social evils,” he said in the Kennedy Centre interview.

Despite being the youngest-ever Nobel recipient, Malala’s come a long way