Gilani seeks immuni­ty for his son; police have arrest­ed only one guard so far.
By Akbar Bajwa
Published: October 10, 2014
Tweet Email 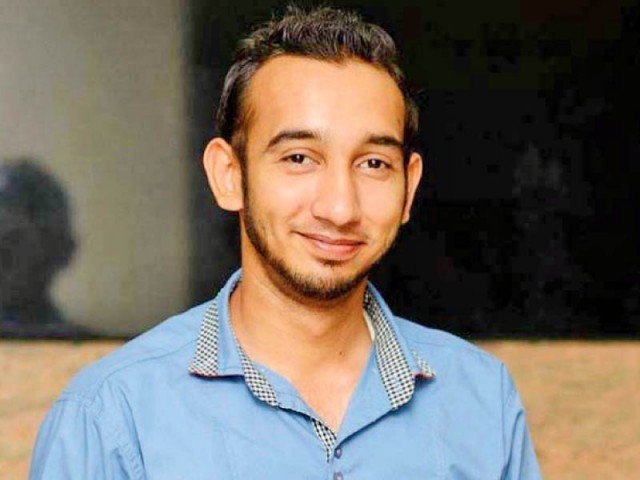 Student Tahir Malik, shot dead by Abdul Qadir Gilani’s guards on Wednesday night, was laid to rest in Lahore’s Wahdat Colony graveyard on Thursday, after his funeral – attended by hundreds of Lahorites – was offered in Punjab Cooperative Housing Society.

Heart-wrenching scenes were witnessed when the family and friends of the slain boy brought his body to the cemetery. Tahir’s mother, Shameem Bibi, while cursing those responsible for her son’s death, said “my world has been rendered colourless”.

The deceased’s father, Tanveer, said, “I will never forgive those responsible for my son’s death. His murder is an act of outright terror. The rulers should bring the perpetrators to book at all costs.”

Talking to The Express Tribune, Rashid said PTI stands with the aggrieved family and will extend any help they needed. “This incident will be a test for the rulers and the judiciary. It will help everyone understand as to how serious they are in upholding justice,” he said.

The slain boy’s father interjected by remarking that “the government doesn’t have the courage to arrest former prime minister’s son.”

Abdul Qadir, along with his five private guards, was nominated in the FIR lodged late Wednesday night but the police have so far arrested only one guard, Muhammad Khan, who allegedly opened fire at the boy.

A police official requesting anonymity said the guard was handed over by the Gilani family as the one responsible for opening fire. In his initial statement to the police, the gunman confessed to shooting the young man.

During interrogation, the guard said he signalled the boy to stay away from the motorcade many a time but he would not listen. Muhammad Khan told interrogators that when the boy came too close to the convoy, he opened fire at him, suspecting him to be a target killer.

A police officer privy with the investigation told The Express Tribune that the accused Muhammad Khan stated that “I was aiming at his legs but because I fired at the man out of a moving vehicle, I missed the target and accidentally the bullet pierced through his head.”

Former prime minister Yousuf Raza Gillani advocates the same now for his son, which he once did for his party chief — an immunity.

While commenting over the tragic incident in Lahore, Gilani said the government has done nothing to recover his younger son — who was kidnapped almost 16 months back. “Now they want my eldest son to get kidnapped too,” he said.

The Pakistan Muslim League-Nawaz government has given no sacrifice — neither for democracy nor for the war against terrorism — but PPP has sacrificed its party leadership, family members and children in this way, said Gilani.

The former premier said that his son was receiving death and kidnapping threats and Interior Minister Chaudhry Nisar Ali Khan was also informed about this who has given approval for Abdul Qadir’s security. “My son was followed many times and nearly survived five to seven kidnapping attempts.”

“Pakistan Tehreek-e-Insaf wants to give the issue a political colour and are trying to blackmail me,” he said. “PTI workers are protesting outside my residences in Multan and Lahore without any reason.”

“My son should be given immunity before the completion of investigations. The investigations should be done on merit and if my son is found guilty, I will personally go to offer his arrest.”