Lagard­e says IMF puts the chance of the Euro area slippi­ng back to a prolon­ged contra­ction at 35-40 per cent
By AFP
Published: October 9, 2014
Tweet Email 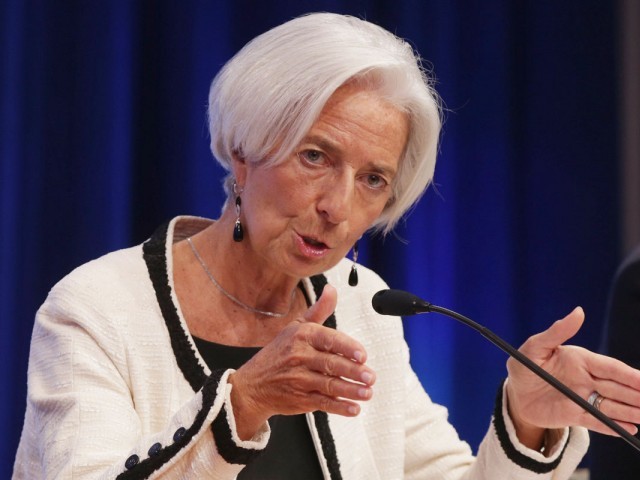 WASHINGTON: International Monetary Fund chief Christine Lagarde warned Thursday that the Eurozone could fall back into recession if action is not taken to prevent it.

“We are not suggesting that the zone is heading toward recession, but we are saying that there is a serious risk that that happens if nothing is done,” she said.

Lagarde said that the IMF puts the chance of the euro area slipping back to a prolonged contraction at 35-40 per cent – “not insignificant,” she added.

“If the right policies are decided, if both surplus and deficit countries do what they have to do, it is avoidable.”

Lagarde was speaking at a press conference to kick off the annual meetings of the IMF and World Bank in Washington.

The IMF earlier this week cut its baseline forecast for growth in the 18-nation Eurozone to 0.8 per cent this year and 1.3 per cent next year. But with deflation a growing threat and demand and industrial output falling even in eurozone powerhouse Germany, a worse outcome is possible.

Lagarde said only a “very modest part” of the Eurozone slowdown can be blamed on the Ukraine crisis and the economic sanctions western Europe and the United States have placed on Russia.

If the eurozone continues to stall, IMF chief economist Olivier Blanchard warned on Tuesday, “it would be the major issue confronting the world economy.”