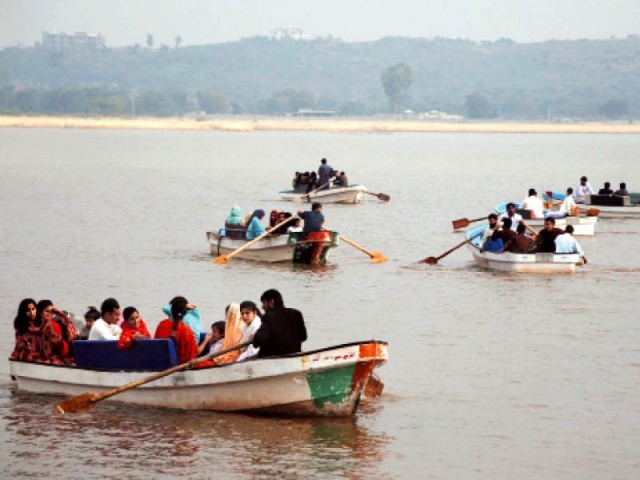 With their religious rituals complete, residents of the twin cities thronged public parks and picnic spots on the third day of Eidul Azha.

Major tourist spots such as Rawal Lake View Park, Pir Sohawa, Shakarparian, Daman-e-Koh, Ayub Park and Nawaz Sharif Park, among others, remained packed with people enjoying the long holiday. Majority of picnickers were witnessed doing BBQ at the parks and enjoying having a good time with their loved ones.

“We have made special arrangements to keep the park clean and have asked people to take extra precautionary measures while burning coal or wood while cooking to avoid any mishaps,” said a Capital Development Authority (CDA) employee at Lake View Park who wished not to be named.

He said every year, on the third day of Eid, the park is replete with people who mostly come in large groups and cook food.

Talking to The Express Tribune, an official of Islamabad Traffic Police (ITP), who also wished anonymity as he was not allowed to talk to the media, said they had made special traffic plans to control traffic flow in the capital on Eid.

“Massive traffic jams are witnessed on Murree Road on public holidays, therefore this year we have made all-out efforts by deploying more policemen and allotting parking area on the green belts to avoid traffic congestion,” said the ITP official.

Despite high inflation and devastating floods in the country which reportedly resulted in a high number of livestock deaths, an increase of 12-15 per cent was witnessed in animal sacrifices in the twin cities compared to last year, according to the Pakistan Butchers Welfare Association (PBWA).

Talking to The Express Tribune, PBWA President Khurshid Qureshi said on this Eid an increase was witnessed in the number of scarifies compared to last year.

He said according to the leftover collected, it is estimated that this year over 100,000 goats/sheep were slaughtered in the twin cities.

Qureshi further said there was also an increase in the number of camels slaughtered this year, adding that this Eid 400 slaughtering points were established in the capital and 800 in Rawalpindi.

CDA’s sanitary staff disposed of remains of over 55,000 sacrificial animals during the three days.

Two emergency hotlines had also been set up to monitor work round the clock, he informed, adding that more than 110 citizens contacted CDA on the numbers for collecting animal remains.

He said that 30 deep trenches had been dug up at 18 different locations to dispose of the waste.

During the emergency operation, lime powder was also applied on garbage trolleys and at major sacrificial places.

Kazmi lauded the efforts of the sanitary workers for timely disposing of the remains.

The official said RWMC disposed of the waste in Losar, a landfill near Rawat. He said the operation was carried out in several areas, including Potohar Town, Rawal Town and other parts of the city, except the cantonment.

“We received 400 complaints from different areas of the city which were addressed immediately,” claimed the official. He said that a special control room was established by the company in order to address the problems.

The official added that this was the first operation being carried out after being established last year by the provincial government.

In most of the areas of Rawalpindi, residents faced gas load-shedding on Monday and Tuesday — the first and second day of Eid. Satellite Town blocks A, E, F, Dhoke Kala Khan, Gulshan Dad Khan Colony and some parts of College Road, among others, had little or no gas during the holidays.

Moreover, CNG was only available on the first day of Eid. “Eid is a festive time when people have to travel to meet relatives, friends or go for picnics. But this Eid it has become difficult due to the unavailability of CNG,” said Mohammad Aamir, who came to a petrol pump at Tarnol to fill his car on the third day of Eid.

Public transporters were of the view that they did not earn much profit compared to last year because of CNG load-shedding.

“Eid is the time when we earn profit as many people usually book our vans or cabs to go to various picnic spots but due to the unavailability of CNG many people did not do it as they were unable to hire the van on petrol or diesel charges,” said Mohammad Ashfaq, a Hiace diver.

Atif Hussain, a taxi driver, said, “I just drove my taxi on the first day of Eid as CNG was available. On the other days I kept it parked at home as I cannot afford running it on petrol.”

Before Eid, the government had announced that gas would be available on all three days of Eid but this was reportedly not the case.

All major public hospitals of the twin cities remained on high alert on Eid. Hospital staff were cautioned to be prepared owing to the recent increase in the number of dengue fever cases and Crimean–Congo hemorrhagic fever (CCHF) in Rawalpindi.

So far, a total of 73 cases of dengue fever have been reported in the garrison city and blood samples of many suspected cases have been sent to the National Institute of Health for tests.