Anguish of a veteran

Anguish of a veteran 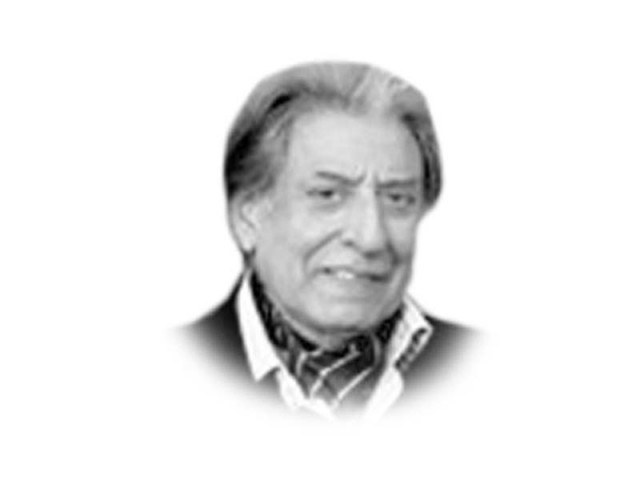 The writer is a retired air commodore of the Pakistan Air Force and is author of Flight of the Falcon (Vanguard, 2009)

The deep anguish of this octogenarian, and passionate Pakistani, emanates from an article titled “Honouring Maulana Abul Kalam Azad” by Saad Saud, which was published on these pages on September 9, 2014. The article honoured the malicious Abul Kalam Azad and with callous insensitivity, denigrated the father of the nation, the Quaid-e-Azam.

I am sure that Indian journalist and anchor Karan Thapar would not dignify the writer’s unsolicited interference into India’s Bharat Ratna medallion award affair with a retort on whether the award should go to the intrepid soldier Field Marshal Manekshaw, the toady Gandhi or to Nehru, who was a charlatan, and was against the idea of a home for Muslims outside the clutches of rabid Hindutva majority. The impertinence typifies pseudo journalism, based on contrived history and the irreverence to the father of this nation state whose intellectual superiority, integrity and statesmanship is being exalted by many Western intellectuals today, who have opined that had Jinnah been a leader of a Western nation instead of in the subcontinent, historians would have placed him even above Winston Churchill. Gandhi and Nehru’s combined intellect did not match that of Muhammad Ali Jinnah.

The writer refers to the Quaid as ‘Jinnah’ and Abul Kalam as ‘Maulana’. His exuberance is shorn of historical veracity and is an insult to the raison d’etre of Pakistan. He has chosen to eulogise to the heavens, Abul Kalam, who was a loyal protege of Nehru and Gandhi and a brigand who hated the idea of a Muslim nationhood based on the incontrovertible Two-Nation Theory. The columnist has crossed the Rubicon verdict of history, reprehensibly at the cost of denigrating the Quaid-e-Azam, while contemporaneously praising the opportunist Abul Kalam Azad. He writes, “A staunch adversary of communal politics and the Two-Nation Theory … Azad was never reconciled with parochial interests (the idea of Pakistan) and communal agenda (the Muslim League’s demand for Pakistan to escape Hindutva genocide)”. He has praised Azad’s motive to trash the Two-Nation Theory and the idea of Pakistan motivated by personal profit by bartering his Muslim scholar identity to curry favour from Gandhi, claiming him to be a saint of peaceful politics. Gandhi harboured contempt for Muslims, while lying on railway tracks, and igniting hysteria and frenzy amongst the illiterate Hindus was Azad’s concept of peaceful agitation. Gandhi injected Hinutva religion in politics, kicked out his son for marrying a Muslim. The writer has skipped over the crime of Babri Mosque’s destruction by a frenzied mob, or the train tragedy, or the Modi-inspired massacre of Muslims in Gujarat and the mass rape of old and young female Muslims. Azad’s souls must have laughed at these tragedies as minor incidents in a nation of more than a billion people.

I am now in my octogenarian years. My life was marked by a passionate love and service for Pakistan from before its creation as a dedicated Muslim Student Federation leader of the original Muslim League of the Quaid-e-Azam, to leading in two wars with arch enemy India.

I was deeply pained and rattled at how a journalist bludgeoned my sensitivities and perhaps, that of a multitude of devout disciples of the greatest leader of the last century, Quaid-e-Azam Mohammad Ali Jinnah, who gave us a country and identity.

Saad Saud writing a eulogy for an irrelevant man, Abul Kalam Azad, and that too out of context, provoked the sensitivities of the nation who have only one peg to hang its glory on — the sage Quaid-e-Azam.

The writer needs to apologise for his immature diatribe.