Says after coming to power PTI will make Pakist­an self-relian­t in one year.
By Qamar Zaman
Published: October 5, 2014
Tweet Email 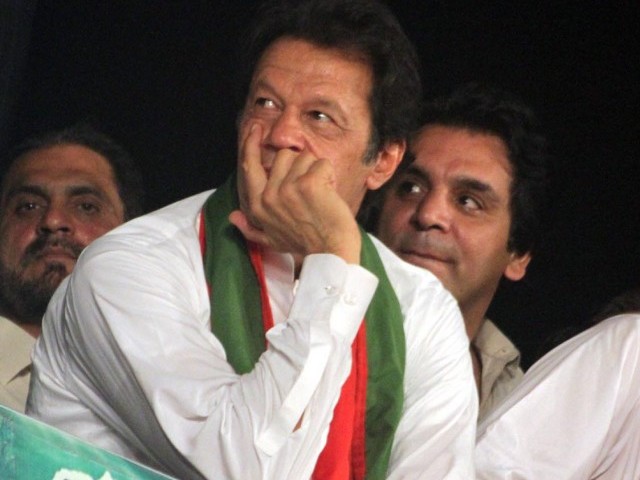 "The GHQ didn’t make me a successful cricketer and I built the Shaukat Khanum Memorial Hospital with my own struggle," PTI chief Imran Khan. PHOTO: INP

Pakistan Tehreek-e-Insaf (PTI) chairman Imran Khan, who has been campaigning for an audit of the 2013 elections that he believes were massively rigged, has predicted that the next elections will be held before the next Eid festival.

Addressing his supporters on the 52nd day of his party’s dharna at Islamabad’s D-Chowk, Imran felicitated his supporters and said he was educating the Pakistani nation on election matters so that their mandate could not be stolen in the next elections.

“I want to educate you, so that no one can steal your mandate in the next elections,” he said.

The PTI chairman said people had started understating rigging due to the Islamabad sit-in. “The prices of petroleum products have come down and we will make sure that electricity tariff is also revised downwards,” he said.

He also referred to a report of the Free and Fear Election Network (FAFEN) which says that audit of Election Commission of Pakistan’s (ECP) Form 14 [consolidated result of a polling station], Forms 15 and 16 will reveal whether the elections were rigged or not and which constituencies should be audited.

The PTI chief said the National Database Registration Authority (NADRA) had asked the ECP for a specific paper for the ballots. “An investigation should be held to dig out the reasons for not procuring that paper,” he said.

Imran also predicted victory for his party in the next elections and said that after coming to power, his party would improve governance, introduce meritocracy, improve the judiciary’s performance and make the country self-reliant in just one year.

Talking about the past rulers, he said no one had ever thought of changing the system. They only asked the International Monetary Fund (IMF) for financial assistance as they were not politicians, he said. “The rulers have no political training. They come to power accidently, and therefore don’t know the country’s real potential.”

He said the army’s support and financial assistance from the Inter-Services Intelligence (ISI) could not turn a person into a leader. “No one would have known Prime Minister Nawaz Sharif, if he had not been picked up by General Jillani,” he added.

The PTI chief said he did not believe in short-cuts. “The GHQ didn’t make me a successful cricketer and I built the Shaukat Khanum Memorial Hospital with my own struggle. Then I made the Naml College and finally started my political struggle,” Imran said.  “After continuous struggle of 15 years, the PTI staged a successful rally in Lahore,” he added.

In a veiled reference to Pakistan Peoples Party [PPP] slain chairperson Benazir Bhutto’s will, he said: “We have not heard of any political and democratic party where a leader have entrusted his leadership to her son or husband through a will.”

Despite quota: Balochistan again cheated out of postal service jobs