Documentary on teenager raped in Sindh wins an Emmy award

Documentary on teenager raped in Sindh wins an Emmy award 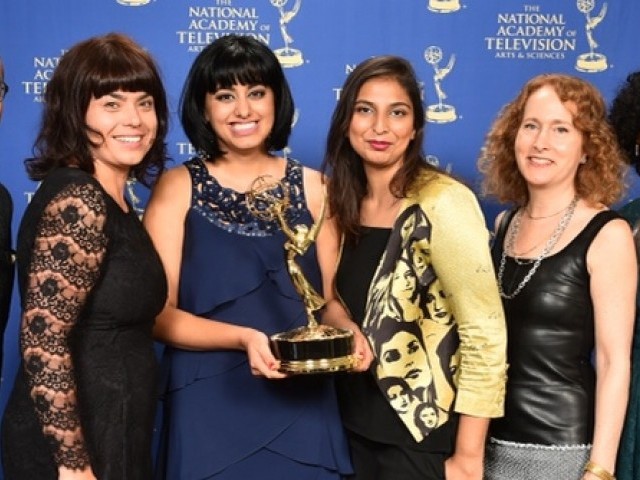 The team of Outlawed in Pakistan. PHOTO: HABIBA NOSHEEN

Outlawed in Pakistan, a documentary directed and produced by Pakistani-Canadian journalist Habiba Nosheen and German journalist Hilke Schellmann, has won an Emmy Award.

The film follows the story of a teenage girl, Kainat Soomro who was allegedly raped in a village in Dadu, rural Sindh in 2007.

“As a Pakistani filmmaker and journalist I am so pleased and honored that Outlawed in Pakistan won an Emmy last night in New York,” a jubilant Nosheen told The Express Tribune.

“It was a film that took my co-director Hilke Schellmann and I five years to make. This was unbelievable and something that I could have never imagined as a little girl growing up in Lahore,” she added.

The 45-minute film was one of 15 short documentary films to be screened at the 2013 Sundance Film Festival and also aired on PBS Frontline.

According to PBS, the documentary addresses deep rooted issues in Pakistan’s society: “In Pakistan, women and girls who allege rape are often more strongly condemned than their alleged rapists. Some are even killed by their own families. For this unforgettable documentary, filmmakers Habiba Nosheen and Hilke Schellmann spent years tracing one alleged rape victim’s odyssey through Pakistan’s flawed justice system—as well as her alleged rapists’ quest to clear their names.”