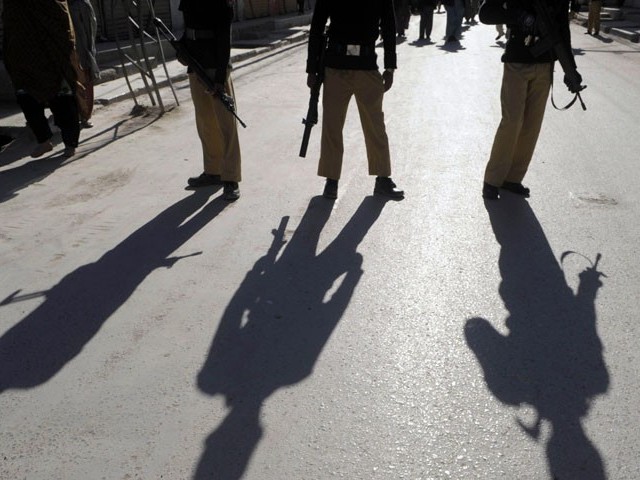 A centralised system is in place for procuring army uniforms, however, militants still manage to get them by stealing or snatching.. PHOTO: AFP

The disguise allows them the obvious advantage of carrying out anti-state activities with a new ease. The phenomenon persists because uniforms are easily available across the country in the absence of standardised provision centres.

Over the past few years, the use of police, army and Frontier Constabulary (FC) uniform by militants and kidnappers has increased as it is considered the most effective way to dodge security checks. As law-enforcers increasingly use civilian vehicles and cars to patrol at night, militants opt to go in uniformed, operating under the assumption that they will rarely be stopped.

Last June, several men in police uniforms stopped Dr Shakir Hussain’s car as he was leaving his clinic in Dabgari Gardens. They asked him to come with them but the doctor became suspicious of the ‘policemen’s’ intentions and refused. The men then opened fire on Hussain’s car, killing his guard and injuring his brother Altaf Hussain. One of the attackers was shot dead in retaliatory fire. It turned out that the men were foreigners and had been sent to kidnap the doctor; they were wearing police uniforms so their intended victim would not resist, however, their kidnapping attempt failed.

The deceased kidnapper was identified as an Afghan refugee and two of his accomplices were arrested later that night by the FC as they attempted to speed away but rammed into a wall. The men were unable to speak Pashto, Urdu or any other local language.

Aside from the botched kidnapping attempt of Dr Shakir Hussain, in the past, Iranian and Afghan diplomats have been kidnapped from Hayatabad by militants wearing security forces uniform. Similarly, Badhaber police has also been ambushed by militants in army uniform.

The attackers in the Nanga Parbat slaughter in June 2013 were reportedly dressed as Gilgit Scouts.

Easy access to police uniforms makes matters worse. A centralised system is in place for procuring army uniforms, however, militants still manage to get them by stealing or snatching.

A police official told The Express Tribune police uniforms are easily available in the markets. “Officially only one uniform is provided to each policeman in a year due to the police department’s limited funding and this is the major problem,” he said.

A uniform a year is insufficient, an officer needs at least 12 uniforms while a constable requires at least three, he added.  “Since the department fails to fulfil the clothing requirement, policemen are forced to arrange for their uniforms themselves,” said the policeman. “Nearly every tailor in the city can stitch a police uniform for a few hundred rupees. They can do the same for militants or criminals,” he added. His replies make it obvious that tailors do not really question the legitimacy of the order.

A police uniform can cost anything between Rs1,200 to Rs2,500, including the cost of the fabric and stitching.

“The fabric for trousers costs Rs500 and Rs150 for the shirt. The pants are stitched for Rs250 and the shirt for Rs150,” the constable told The Express Tribune. He added tailors at Police Lines are comparatively cheaper.

At the moment, obtaining an army uniform is not as easy. According to a security forces official, there is a centralised system of uniform provision in the army and therefore the outfit is not available in the open market.

“In the past our khaki uniform was easily available everywhere but now it has been changed to the camouflage pattern and can only be obtained at army-designated shops,” he added.

“Our problem is that militia-coloured uniforms are used by FC and several other paramilitary forces,” he said. “Anyone wearing such clothes can roam from Waziristan to Peshawar freely without being stopped.” He added, “The supply of uniforms can be regulated but it would be a difficult task.”