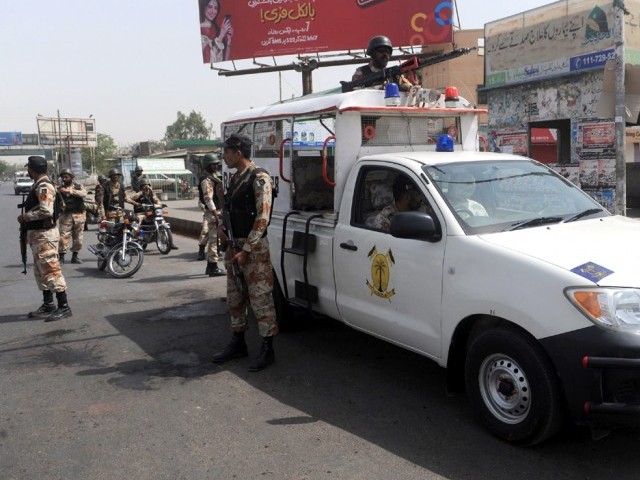 The Rangers claim comes just five days after it was announced that security forces were revamping the operation strategy in Karachi.. PHOTO: AFP

Colonel Tahir Mahmood presented a one-year review to the Senate Standing Committee on Interior Affairs on the Karachi operation. The Rangers claim comes just five days after it was announced that security forces were revamping the operation strategy in Karachi.

“Security forces have destroyed the TTP network in Karachi,” claimed Mahmood, who was accompanied at the meeting by other Rangers Sindh officials.

Colonel Mahmood directly linked the success of the Rangers operation with Operation Zarb-e-Azb in North Waziristan Agency, saying thousands of alleged criminals have been picked up since September last year.

The Senate Panel headed by Senator Talha Mahmood of Jamiat Ulema-e-Islam-Fazl (JUI-F) called for a briefing on the Karachi operation last month.

During the briefing, law­­makers including Senator Tahir Mashhadi of the Mut­tahida Qaumi Move­ment and Shahi Syed of the Awami National Party questioned why peace could not be maintained in Karachi despite the Rangers’ claim that the TTP’s network in the city had been destroyed.

In response, representatives of the Ministry of Interior, Rangers and Sindh Police said that more than 3,000 targeted operations were carried out in the crime-infested port city and around 5,500 suspects were arrested. Some of these men had political affiliations, the representatives said.

Around 2,300 of the arrested suspects were handed over to the police while more than 4,000 weapons were seized during the raids, Colonel Mahmood told the committee. Around 60 militants working for TTP were arrested while 352 persons affiliated with banned outfits were arrested, he said.

Representatives of Rangers Sindh told the committee that a letter has been sent to the prime minister outlining how law enforcement agencies can deal with street crimes and land grabbing. “Though it does not fall under the Rangers’ mandate to control these crimes, we are cooperating with local police to get rid of miscreants involved in such crimes, perhaps a major cause in the city’s unrest,” Colonel Mahmood said.

The Rangers report stated that incidents of kidnapping and extortion have reduced in Lyari by 55 per cent since the operation started. Rangers have also set up pickets in the area, Colonel Mahmood said.

Briefing the committee about the events of September 24 when Rangers personnel arrested MQM members, Colonel Mahmood said a majority of the MQM workers were released. He added that three target killers were arrested during the raid.

Harbinger of change: Say no to VIPs — the ‘Vultures in Pakistan’