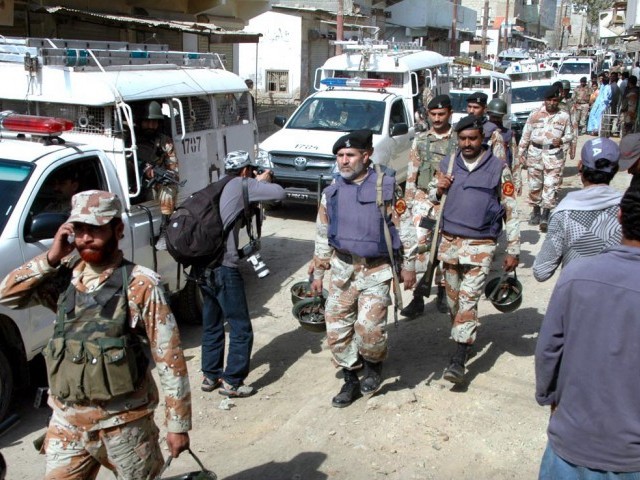 A file photo of Rangers personnel during a raid. PHOTO: APP

Rangers submitted a one-year review report to the committee and briefed the members about the operation in which they arrested hundreds of alleged criminals since it started on September 7 last year.

Giving numbers, Col Mehmood said more than 3,000 targeted operations were carried out in the crime-infested port city and and around 5,500 suspects were rounded up. He said around 2,300 were handed over to the police while more than 4,000 weapons were seized during the raids.

Col Mehmood informed the committee that land grabbing and street crime do not fall under the jurisdiction of Rangers, however, they have submitted a summary to the premier on how these crimes can be controlled.

Speaking about targets achieved in Lyari, the Rangers official said incidents of kidnapping and extortion have reduced by 55% since the beginning of the operation. Col Mehmood said the law and order situation improved in the neighbourhood as Rangers have set up pickets in the area.

Briefing the committee about what transpired on the night of September 24 when Rangers personnel arrested MQM members, Col Mehmood said the security officials went inside party office after their patrol was fired at in Gulshan-e-Maymar. He said Rangers arrested three target killers during the raid and that many of the arrested MQM workers were released soon after.