Pakist­an condem­ned the US strike, the eighth so far this year. 25 suspec­ted milita­nts killed in Shawal air strike­s.
By Our Correspondent
Published: September 29, 2014
Tweet Email 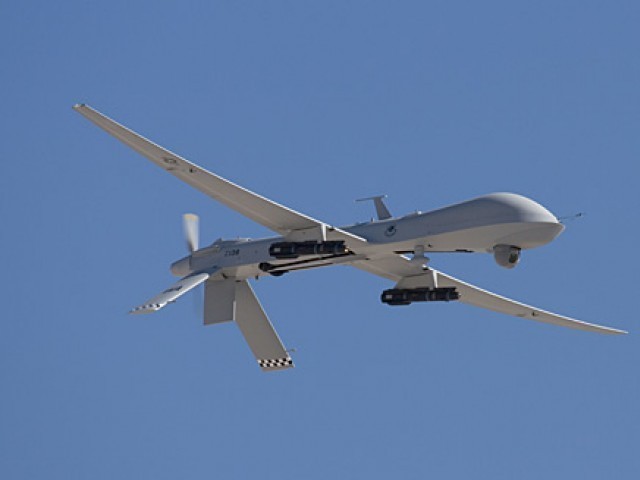 A file photo of a drone. PHOTO: AFP

WANA / ISLAMABAD: At least four suspected militants, including two foreigners, were killed in a US predator strike in South Waziristan Agency, while in neighbouring North Waziristan, where Operation Zarb-e-Azb has been ongoing since mid-June, over two dozen suspected terrorists were killed in fresh air strikes on Sunday.

Security officials said US pilot-less aircraft targeted a compound in Karezai Pull village near Wana, the administrative headquarters of South Waziristan, which used to be the stronghold of Tehreek-e-Taliban Pakistan before they were routed in a military operation in 2009.

The strike happened when two foreign militants disembarked from a vehicle in front of the compound where they were received by another two men. Intelligence officials and three Taliban fighters claimed that the dead included two Arab militants and their local cohorts.

It was the second drone strike in less than a week. At least 10 suspected militants, including Uzbek fighters, were killed in a predator strike in the Data Khel area of North Waziristan on Wednesday. Officials say that a large number of local and foreign militants have slipped into South Waziristan after the military launched Operation Zarb-e-Azb on June 15.

Pakistan condemned the US strike, the eighth so far this year. “Pakistan believes such strikes constitute a violation of its sovereignty and territorial integrity and demands their immediate cessation. The government of Pakistan is already taking decisive action against terrorist elements,” The Foreign Office said in a statement referring to the Waziristan operation.

At least 25 suspected militants, including many foreigners, were killed in air raids in the Shawal area on Sunday, the military’s media wing said. “In precise strikes last night five terrorists’ hideouts were destroyed and 15 terrorists including foreigners were killed in Shawal area,” the Inter-Services Public Relations (ISPR) said in a statement.

According to an official tally, more than 1,100 suspected terrorists have been killed while close to 90 soldiers have also lost their lives since Operation Zarb-e-Azb began.

Separately, at least six militants were killed early Sunday in a gunfight that erupted after they attacked a paramilitary checkpoint in Khyber Agency near the border with Afghanistan.

“A group of about 30 militants attacked the Ghundi check post early Sunday, but security forces had prior information about it and were well prepared,” a senior security official told AFP on condition of anonymity.  “At least six militants were killed in the gunfight and the attacking militants were forced to flee,” the official said, adding there were no casualties among security forces.